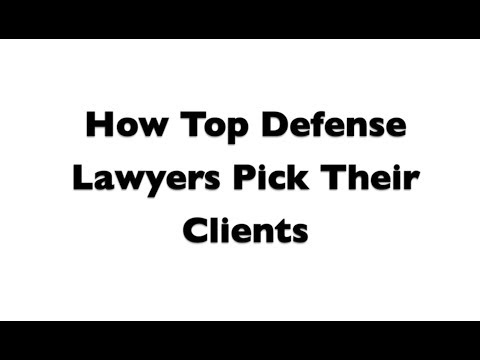 Below is a transcript for the YouTube video: Warrior Mindset – How Top Criminal Defense Lawyers Pick Their Clients

I’m Tim Bilecki, and I’m the managing partner of the collection department. I’m with my colleague Mike Waddington here on the military law News Network. One of the things I want to talk about today is how we choose clients and my law firm in particular; I probably get 60 to 90 quality leads a month. Those are individuals who want to retain my law firm to represent them. And I know you’re about the same at your law firm, Mike. So one of the ways that I know that you choose who you want to represent, I know you study a lot about the warrior ethos. I know you study a lot about warfare, you’ve written books, the trial warrior, I know that you are a student of history, and I can even see in the background, the picture off to your shoulder, the samurai photo.

Yeah, that’s a watercolor I had commissioned and sent to me and framed because that depicts how I think, how I approach courtroom setting, and you wait for that right moment to strike. You have ultimate calm and confidence in your abilities. And you’re not like a basket case running around, and you know, when to strike and your strikes must be, they must matter, and they must be lethal. So yeah, Tim, you and I, we’ve been doing cases together, like almost ten years now. We’ve known each other for about ten years. And, and we’ve gotten to know each other fairly well, with our cases together, we traveled together to go to different conferences, and in training at different conferences with other lawyers around the country, we read a lot of the same books, it’s the same here, we probably get about, like, today, I probably got nine leads to our website, I would say, one or two of them have the right combination of the attitude and the type of case we want to take. It’s a serious case, the person wants to fight, and they have a positive attitude. And they’re not a complaining whining type of person. Because it’s hard to win a case, like when we’re going into the ring, like you’re gonna step into the octagon, it’s one person fighting another. So that’s kind of like a trial. You don’t need your client or their mother or their family tripping you as you go into the tech fight that opponent that’s trying to punch you or stab you. When you don’t need your client blinding you with on your back choking you. And I’m sure of your experiences. And I know you have because many of the cases that are winnable that you don’t win. It’s because of things that are done by the person you’re trying to help.

We talked about this in another video. But if every problem you have is because of something else, or someone else is doing, or the world is against you, or the command is against you, or woe is me, and everything’s wrong, you are a victim. You have that victim mentality. And first off, it’s not endearing. Second off, it’s very, it just it’s mentally draining. And the third is that it doesn’t breed success, right? Because I want someone who’s gonna be a victor, I understand you may be depressed. You may have a lot going on. And that’s the reality. If you’ve been charged with a sexual assault or charged with BAH fraud or some felony-level offense, a lot is going on because your future is unknown, and it could dramatically change. But I want someone that can channel that and come into my office and say, you know, Mr. Blackie, Tim. I’ve got all this on my plate, I’m ready to fight. What do you need from me to fight this? I want to win this as much as you do. You want to win it more than I do. But often, if I want to win it more than my clients. So when I look at that when someone says I didn’t do this, I mean railroaded by the government that I’m being overcharged, I want to win, do what you need to do to assemble the team to win. So those are the clients I choose. Because we get a lot of people that want to retain our services, when I need you to have that positive attitude and that will to win and that Victor’s mentality, so we can go into trial, you’re going to listen to what I need, I need you to do, you’re going to take the gloves off, we’re going to go into that octagon, or you’re going to go Let me kick their ass.

Tim, in the reality of it. You know, as a lawyer, our only commodity is our experience in our time. And so we don’t sell products, you know, we don’t sell chewing gum, it’s our time. We have 52 weeks in the year. And I think it’s important that you take time to practice to train to be prepared, and when you take time off to be with your family and things like that. So you have 52 weeks in the year, but a few of those are holiday weeks. And so really you only have enough time to try about, you know, anywhere from 15 to 25, which is pushing it. Maybe a good average is 18 20 cases a year. So out of them, out of the 1000s of people accused worldwide in the military, I can only really try 20 cases maximum a year. So the bottom line is I want to be with people that want to win. And I want to be with people that I like, that I want to spend a week with. And so that’s one of the things that we did when we screened the clients, we’re not just asking them, Hey, did you have money for the fees, I mean, a lot of people have money for the fees, or they can get the fees. And if they don’t have the winner’s attitude, I don’t want to deal with them. Because it makes my life miserable. It decreases our chances of winning. And I want to help the people. I want to get that I want that person walking out of the courtroom with their baby in their arms, going out to dinner with their wife, and family to celebrate the victory. And frankly, I don’t give a damn. I don’t care what the person did, or they’re accused of doing in the sense that it’s not like we only represent people that are 100% innocent. If the person is being accused, we will ensure that the government has the hardest time possible.

That’s exactly right. My time is a precious commodity that’s in short supply. As you said, there are 12 months in a year. And I’m usually up by 4 am. I’m usually working till six, seven o’clock at night, I’ve got a wife, a family, I manage a law firm. So there’s a limited amount of time that I have I can dedicate towards trying cases. And that’s probably about 15 trials a year. Sometimes I can do 2022. Other times it’s 12 depending on the case’s complexity, but I have to be picky about who I take on as a client. After all, it’s not just about the money, because frequently people say they will have certainly have the fees or can come up with fees. And I won’t necessarily take that client or refer them to someone else because it’s not someone I want to represent personally.

We both want to represent winners to help them, and it increases your chance of winning in trial and increases your chance of winning and trial. And also, we want to have happy clients who go out and continue with productive lives. And you can’t do that if you have a client that’s a constant complaining victim. Amen. Hallelujah. Can I get an amen?