Does Hiring a Lawyer Make Me Look Guilty? 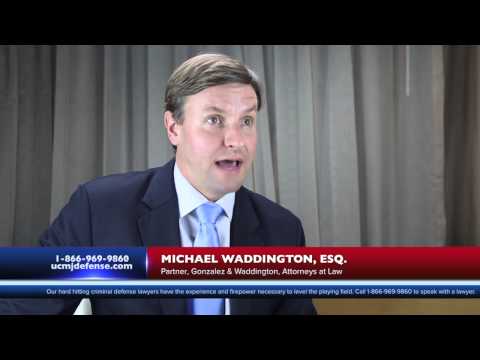 Below is a transcript from the YouTube video: Selecting the Best Military Defense Attorney – Does Hiring a Lawyer Make Me Look Guilty

If you have been accused of a crime, then the military already believes you’re guilty. So they have people out there investigating prosecutors plotting and getting ready to charge you. So that’s the point time, or you need to get someone involved to represent you and advocate for your rights and tell you what to avoid doing and what to do to possibly get that case dropped before you are charged.

Call today to consult with our relentless court-martial attorneys

Soldiers, Sailors. Airmen, Marines, and Coasties require uncompromising military defense lawyers to advise them at their court-martial or administrative separation hearing. Therefore, if you are suspected of a military crime such as Sex crimes, Murder, Abusive Sexual contact, Conspiracy, or Failure to Obey Order or Regulation, then contact our relentless criminal defense attorneys now.

The UCMJ forms the backbone of the military’s legal system and applies to all active duty, national guard and reserves, and retired armed forces personnel across all branches. If you or someone close to you has been charged with a crime under the UCMJ, you must turn to military defense lawyers for help right away. Find a hard-core military lawyer at Gonzalez & Waddington. As a former member of the US Army’s Judge Advocate General’s Corps (JAG), fierce civilian military defense attorney Michael Waddington has a proven track record of representing American Military personnel in criminal and non-judicial matters.

American military members need to know their rights. US Soldiers, Sailors, Airmen, Marines, and Coasties have the Constitutional right to be defended by our military defense lawyers.

Our civilian-military defense lawyers can manage your allegations and defend your freedom. Whether you are facing allegations such as Sex crimes, Maiming – Article 128a, UCMJ, Sexual Assault of a Child, Conspiracy – Article 81, UCMJ, or Assault of Superior Commissioned Officer – Article 89, UCMJ, the hard-core military attorneys at Gonzalez & Waddington can help.

When Should I Hire A Criminal Defense Lawyer?

If you are considering hiring a lawyer and are not sure how much experience they have, it is appropriate to ask the attorney how many years of experience the firm you hire has in handling this type of case. You will be better off keeping a law firm with several lawyers who practice criminal defense for years to work together to plan out your defense plan.

Many people do not realize that including another defense lawyer at the start of the process can save money. Your firm’s lawyers should be able to work as a team and be familiar with your case. When you hire a single attorney from a criminal defense firm, you know that one of the many criminal attorneys in the firm will always have your case under control.

The cost of a criminal defense attorney can depend on several factors, including the lawyers’ experience, reputation, track record, and geographical location. It is best to invest in an experienced and qualified lawyer, especially in serious criminal charges. Whether or not you face serious charges on the indictment and whether or not you are guilty, the costs will fluctuate with your case.

If you are charged with an offense, an offense that could result in a long prison sentence, you should hire a defense attorney. Your lawyer may try to dismiss your case for lack of evidence, or you may reach a plea deal to reduce the charge. A criminal defense attorney may negotiate a dismissal of the charge, or, if not, he may reduce your sentence with a plea.

Obtain a criminal defense lawyer if you or someone close to you has run afoul of the law or is facing serious criminal charges. In some cases, you can hire criminal defense attorneys before you are charged with a crime, but if you think you might be the subject of a criminal investigation, the sooner, the better for you. If an indictment is inevitable, it may be in your interest to hire a lawyer before you are arrested.

If you’ve been accused of a crime, one of the most important things you can do is hire a good military defense lawyer. Defense attorneys handle various criminal cases, including misdemeanors, misdemeanors, drug offenses, white-collar crimes, and many other federal and state crimes. Since legal matters are handled differently from arrests, types of a warrant, and legal advice, a qualified criminal defense lawyer can protect your rights and ensure the best result for your case.

If you face an assault or battery charge from another party claiming that you have acted criminally, hire an outstanding defense lawyer to help you fight your accusations. It is essential to have a criminal defense lawyer at this stage, as this can influence the decision to bring or drop charges and reduce the sentence. In addition, criminal law and penalties vary by state, so it is important to have a lawyer who has experience in military, state, and Federal court systems.

This is a common defense strategy used by many lawyers in the fight against assault and battery charges. First, the defense counsel tricks him or her into agreeing on a so-called “walk-through arrest” or “arrest date,” during which the defendant presents himself to the district judge, as agreed in advance. Then, the case is resolved instead of going to trial by letting the defense negotiate a plea deal, also known as a plea agreement or no plea deal.