How to Win at a Military Discharge Board – Military Lawyer Tips 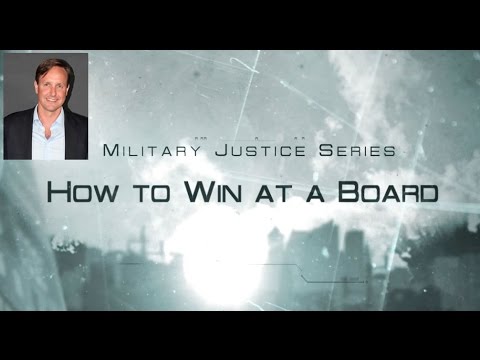 Military lawyer, Michael Waddington, discusses how to win at a military discharge board (BOI, administrative separation, show cause, etc.).

Below is a transcript from the video: How to Win at a Military Discharge Board – Military Lawyer Tips

It’s no secret that the military is scaling back. One of the kinds of dirty ways that they’re doing this is they’re using human resources command to flag anyone who has any misconduct in their background. It could be something from four or five years ago that’s very petty. So those officers on senior listed are being flagged and sent off aboard. And a lot of these boards are being mishandled by defense attorneys because they go in there thinking it’s a court-martial and say, Hey, the government has to prove everything. We’re just going to sit back. That doesn’t work.

You have to come into the case ready to prove that your client should be retained. I find that in many of these cases where the accused goes into it, or the respondent, they’re called in aboard, and they sit there and feel that it’s the government’s burden, you will most often lose those cases. So I believe that you have to have your client testify whether it’s unsworn or sworn to present themselves in the best way possible, and convinced that board that you were an asset to the military, that you are currently an asset to the military, that that that mistake you made does not define who you are and the character that you can be trusted, and that you will continue to be an asset to the military and should be retained or allowed to get out with an honorable discharge, depending on your circumstances.

The UCMJ forms the backbone of the military’s legal system and applies to all active duty, national guard and reserves, and retired armed forces personnel across all branches. If you or someone close to you has been charged with a crime under the UCMJ, you must turn to military defense lawyers for help right away. Find a ferocious court-martial defense counsel at Gonzalez & Waddington. As a former member of the US Army’s Judge Advocate General’s Corps (JAG), military defense lawyer Michael Waddington has a proven track record of defending US armed forces personnel in court-martial and administrative matters.

American Servicemembers need to know their rights. American Service members have the right to be defended by criminal defense lawyers, so don’t wait to retain court-martial counsel like Gonzalez & Waddington, Attorneys at Law. Instead, call the relentless military attorneys to arrange a free case review.

Our military attorneys can manage your accusations and protect your reputation. Whether you are facing accusations such as Sexual assault, Death or Injury of an Unborn Child, Sexual Assault of a Child, Accessory After the Fact, or Leaving the Scene of a Vehicle Accident, Gonzalez & Waddington can help.

Our ferocious civilian military defense lawyers can defend the US military in both punitive and non-judicial cases. If American Military service members are facing a court-martial and administrative, our military defense lawyers can defend them. In addition, our ferocious military attorneys can protect your career if you are accused of a crime such as Death or Injury of an Unborn Child, Sexual Assault, Title IX Sexual Misconduct Allegations, or Murder.

In all UCMJ, possible charges are determined by the JAG prosecutors and the chain of command, not by the police. Gonzalez & Waddington are distinguished in criminal defense by their complex knowledge of the law, and we take the time to understand every aspect of a case to achieve beneficial results for our clients. Our hard-core court-martial defense attorneys at Gonzalez & Waddington are heavily invested in criminal defense cases, and we are committed to protecting the interests of our clients. Military JAG prosecutors by the military.

What is Limited Use?

Under the limited use policy, the results of the following tests may not be used as a basis for an Article 15 or court-martial or to determine the “character of service” in an administrative separation action. AR 600-85, para. 10-14c.
Competence for Duty Tests. AR 600-85, para. 10-12a(1).

Medical Tests. The limited use policy would apply to tests obtained as a result of a Soldier’s emergency medical care for an actual or possible drug overdose unless such treatment resulted from apprehension by military or civilian law enforcement officials. AR 600-85, para. 10-12a(3).

If drug use discovered during a limited use test is introduced during an administrative separation, the Soldier must receive an honorable discharge.

The limited use policy does not preclude the use of limited use tests in rebuttal or initiation of disciplinary action based on independently derived evidence. AR 600-85, para. 10-12d(1).

The limited use policy does not apply to the types of tests listed below. These tests may be used at courts-martial, Article 15 proceedings, and administrative separations:

In the case of the United States v. Avery, 40 MJ 325 (CMA 1994), the accused was not entitled to the protection of Air Force limited use policy, which precludes the use of certain evidence derived from a service member’s voluntary self-identification as a drug abuser. The accused voluntarily consented to a urinalysis after his wife revealed his drug use to his chain of command. The accused never admitted to using drugs.

Medical tests are not covered by the limited use policy described above.
Obtained as a result of Soldier’s emergency medical care for an actual or possible drug overdose, where the treatment resulted from apprehension by military or civilian law enforcement officials. AR 600-85, para. 10- 12a(3).
Routine tests directed by a physician are not the result of suspicion of drug use and are not taken in conjunction with ASAP. AR 600-85, para. 10-12a(3).

Command Directed Tests. Be wary of the term “command directed” urinalysis. The ability or inability to use the test results for UCMJ or separation purposes depends on the type of test, not on whether or not it is labeled command directed. In the case of the United States v. Streetman, 43 MJ 752 (AF Ct. Crim. App. 1995), the accused was convicted of marijuana use. The court held that the letter reissuing the original inspection order but labeled as “Commander Directed” (Air Force equivalent to fitness for duty) and ordering accused to submit to drug testing did not transform prior legitimate random urinalysis inspection into fitness for duty test that would preclude the admission of drug test results.