Strategies to Avoid a Court Martial 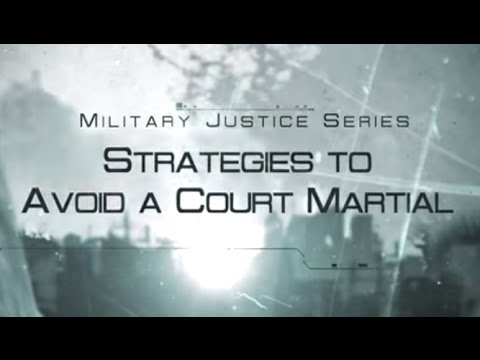 Below is a transcript from the video: Strategies to Avoid a Court Martial

We try to get our clients to write down what happened to write down witnesses’ names, talk to witnesses, and get our evidence lined up, just in case they decide to prefer charges because we take that evidence that we gather. And if it’s helpful to our client, we think we can get the charges not to be preferred to get the government to back down initially.

Often, we present evidence to the prosecution with our client’s consent that shows that the client is not guilty of those crimes or that it will impact the outcome of the case. For example, we know a bunch of evidence about the alleged victim or a government witness. And we know they’re a liar. They’ve accused people in the past.

We know that we can prove that they’re a liar, they are a felon or convict. Whatever it is, we often present that to the prosecution to dissuade them or stop them from actually preferring charges.

When You Need a Military criminal defense Lawyers

We have successfully represented and exonerated US armed forces personnel working around the world. Read our case outcomes with various military attorneys.

Our criminal defense attorneys have won a reputation for defending American Military service members at military installations globally. For example, suppose you are accused of a military violation. In that case, having a determined court-martial counsel can be the difference between being a registered sex offender versus winning your case or saving your career. Our military defense lawyers vigorously fight for US service members in both punitive and administrative matters to include: Sex crimes, Maiming – Article 128a, UCMJ, Deposit of Obscene Matters – Article 120a, or Soliciting Commission of Offenses.

A urinalysis test is constitutional if based upon probable cause. Military Rule of Evidence 312(d) and 315.
A positive urinalysis provides probable cause to seize hair samples for drug testing. In the case of the United States v. Bethea, 61 MJ 184 (CAAF 2005).

A warrant or proper authorization may be required.

Schmerber v. California, 384 U.S. 757 (1966). A warrantless blood alcohol test was justified by exigent circumstances.
In the case of the United States v. Pond, 36 MJ 1050 (AFCMR 1993), warrantless seizure of urine to determine methamphetamine use was not justified by exigent circumstances because methamphetamine does not dissipate quickly from the body.

A urinalysis is constitutional if it is part of a valid random inspection. Military Rule of Evidence 313(b); In the case of the United States v. Gardner, 41 MJ 189 (CMA 1994). The fact that the results of urinalysis inspections are made available to prosecutors did not make the inspection an unreasonable intrusion. (Note: This ruling has not been challenged since the US Supreme Court’s decision in Ferguson v. City of Charleston, 532 US 67 (2001), which found a similar policy unconstitutional). See also Skinner v. Railway Labor Executives, 489 US 602 (1989) (urine tests of train operators involved in accidents are reasonable searches) and National Treasury Employees Union v. Von Raab, 489 US 656 (1989) (urine testing of employees who apply to carry firearms or be involved in drug interdiction does not require a warrant). Chandler v. Miller, 520 US 305 (1997) (to conduct urinalysis without probable cause, must show “special need”).

In the case of the United States v. Evans, 37 MJ 867 (AFCMR 1993). The Commander of the active-duty squadron to which the accused’s reserve unit was assigned had the authority to order urinalysis inspection. But see In the case of the United States v. DiMuccio, 61 MJ 588 (AF Ct. Crim. App. 2005) (Commander of 162nd FW, a national guard unit, had no authority to order the accused to submit to urinalysis because accused was at the time in “Title 10” status vice “Title 32” status even though accused was still part of 162nd FW); In the case of the United States v. Miller, 66 MJ 306 (CAAF 2008) (where urinalysis which was the product of an order issued by a civilian Air Reserve Technician who did not have command authority to issue the order, and thus was not incident to command, was unlawful).

Subterfuge under Military Rule of Evidence 313(b).

Report of Offense. In the case of the United States v. Shover, 45 MJ 119 (CAAF 1996). Marijuana was planted in an officer’s briefcase. During the investigation to find the “planter,” the Commander ordered a urinalysis. The accused tested positive for methamphetamines. Although the test triggered the subterfuge rule of Military Rule of Evidence 313(b), the government met its clear and convincing burden. The primary purpose of the inspection was to end the finger-pointing and hard feelings caused by the investigation. The judge ruled the primary purpose was to “resolve the questions raised by the incident, not to prosecute someone.” The CAAF affirmed.

In the case of the United States v. Campbell, 41 MJ 177 (CMA 1994). Urinalysis test results were improperly admitted where urinalysis inspection was conducted because the first sergeant heard rumors of drug use in the unit and selected the accused to be tested based on his suspicions. The judge erred in finding that the government proved, by clear and convincing evidence, that inspection was not a subterfuge for criminal search.

Primary Purpose. In the case of the United States v. Brown, 52 MJ 565 (A. Ct. Crim. App. 1999). Several members of the unit allegedly were using drugs. Because of this, the Commander ordered a random 30% inspection. The Commander’s primary purpose was because he “wanted to do a large enough sampling to validate or not validate that there were drugs being used in his company, and he additionally was very concerned about the welfare, morale, and safety of the unit caused by drugs.” This met the primary purpose test of Military Rule of Evidence 313(b).

In the case of the United States v. Moore, 41 MJ 812 (N-M. Ct. Crim. App. 1995). The military judge improperly excluded urinalysis results where the accused was placed in a non-deployable “legal” platoon after an Article 15, and the regimental Commander inspected the accused’s platoon more frequently than others. Commander did not target. More frequent tests were based on disciplinary problems.

A urinalysis is constitutional if obtained with consent—Mil. R. Evid 314(e).
Consent must be voluntary under the totality of the circumstances, in the case of the United States v. White, 27 MJ 264 (CMA 1988). Consent is involuntary if the Commander announces his intent to order the urine test should the accused refuse to consent. Military Rule of Evidence 314(e)(4).

If the Soldier asks, “what if I do not consent?”

In the case of the United States v. Radvansky, 45 MJ 226 (CAAF 1996). The totality of the circumstances, not a bright-line rule, controls consent to urinalysis in the face of a command request. Notwithstanding the First Sergeant’s comment that the accused could “give a sample of his own free will or we could have the commander direct you to do so,” the accused voluntarily consented to urinalysis. The mere remark that a commander can authorize a search does not render all subsequent consent involuntary.

But see In the case of the United States v. White, 27 MJ 264 (CMA 1988). Consent is involuntary if Commander replies that he or she will order a urine test.