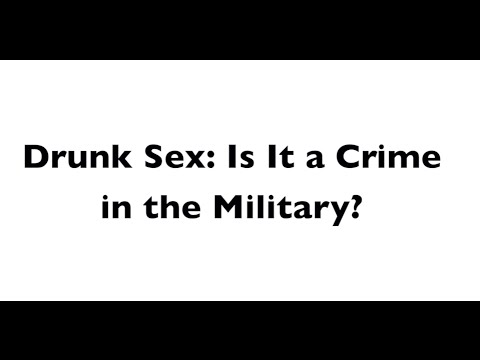 Below is a transcript from the YouTube video: Drunk Sex – Is it a Crime in the Military?

It’s not a crime to have sex with someone who has been drinking alcohol. It becomes a crime when that person cannot consent or is unconscious. However, it’s not uncommon in the military for people to accuse other people of sexual assault simply because they had one or two alcoholic drinks, maybe three or four beers. So they have sex with someone that maybe they wish they hadn’t had sex with. And then the next day, instead of taking responsibility for their decision-making, they blame it on alcohol, and it turns into a military sexual assault court-martial.

The initial response to a reported sexual offense is critical. When called to investigate a sex offense, the investigator should document the:

Victims may delay reporting a sexual assault incident for days, months, or even years. Furthermore, it is possible that victims may never discuss the incident with anyone, including family and close friends. It is imperative that investigators discuss the delay in reporting with the sexual assault victim and document the reasons for a delayed report; however, investigators should not construe the fact that a delay in reporting exists as evidence that the incident did not occur.

During the initial contact with the victim, the investigator must instill confidence in the victim that he is qualified to investigate the offense. An investigator’s interest in the victim and a concern for the victim’s welfare are important factors affecting the victim’s sense of safety and also helps in ensuring future cooperation. Avoid using multiple investigators to interview the victim. Whenever a sexual assault victim is interviewed, the victim will be asked if he desires to have a Victim Advocate (VA) or some other support person present (personal friend, chaplain, or other professional); if an advocate is requested, the interview should not proceed until that support person arrives. The only time a support person or advocate will be removed is if they interfere with the interview process. Consider that a family member or friend may be inappropriate, particularly if the victim is a child and the incident occurred in the home or with family members or friends.

When conducting an interview with the military sexual assault victim, it is helpful to explain what is being done and why particularly during the initial stages. When there is enough information to enable other personnel to begin crime scene processing, the victim must be taken quickly to the nearest medical treatment facility for a thorough examination (the victim must consent to a medical examination). Explain that the clothing worn during the attack must be examined for evidence and make arrangements for the victim to obtain a change of clothing.

The interview of the sexual assault victim should be accomplished using the FETI technique. This technique can significantly enhance the quality of the interview and reduce the risk of a victim changing or recanting his story. It can also increase victim cooperation and participation and significantly improve the chances of successful prosecution. The FETI technique is introduced in chapter 3 and outlined in Appendix C. Multiple interviews may be required to fully get through the incident with the victim.

Multiple interviews, while sometimes necessary, should be kept to a minimum as each additional interview re-traumatizes the victim. A victim’s reaction to the assault may vary; however, it is common for a victim not to remember all the details regarding the incident. Certain memories of the incident may become clearer over time, which underscores the need for follow-up interviews.

The victim may feel ashamed, guilty, or embarrassed and believe he may have placed himself into a situation that resulted in the incident. Victims frequently feel as though the incident was their fault. As a result, the victim may be unable or unwilling to provide details that are embarrassing, which could make him appear as though he is hiding something.

A victim may also withhold significant information, not knowing that the information is critical to the outcome of the investigation. When questioned about certain details regarding an incident, a victim may become “hostile” or “defensive” and may be unwilling or unable to cooperate further with the investigation in order to avoid discussing sensitive or embarrassing details regarding the incident. Investigators should expect that a victim will be reluctant to describe extremely unpleasant events and facts.

Interviews of victims of child sexual assault are extremely sensitive and subject to considerable scrutiny. Additionally, after an interview in which a child implicates an adult, there may be pressure on the child to recant his statement. Care must be taken to ensure these victims are put into the care of a supportive adult, which may ultimately be through Child Protective Services, depending on the support of the non-offending parent.

Most victims know the alleged suspect before the incident. It is important to obtain as much information as possible to determine the full extent of the victim’s relationship with the perpetrator. During the interview, the investigator should—

Investigators should keep in mind that previous or post-assault consensual sex acts do not preclude the possibility that a sexual assault occurred. The investigator should make every attempt to determine what was different between the consensual and unconsensual incidents.

Investigators should obtain or determine the following:

Ask the victim if she can-

Do not assume from a victim’s occupation, associates, habits, or appearance that the victim is promiscuous and most likely consented. Do not infer consent from the fact that the victim has associated with the accused. Very few rapes can be categorized as “stranger” rapes, and the likelihood that the victim knew his assailant, even remotely, is high. The courts decide whether or not consent was given. Always consult with trial counsel. Never ignore physical or other evidence of sexual activity just because the accused admits it. All available evidence is collected, and probative evidence will be forwarded to the USACIL for examination.

Statements and accusations that the victim is known to participate in lewd conduct, habits, or associations or has engaged in specific sex acts with the suspect or other individuals may be admissible evidence. These points should be checked in detail. Although these points may be true, such individuals can be bona fide victims of sex offenses. In many cases, the offender considers them easier targets as they have a reputation and are less likely to be believable as victims.

Investigators must be alert for attempts by an accused to make up untrue stories of past sex acts with the victim. A suspect may produce other individuals who claim such experiences. On the other hand, check on efforts by relatives or friends to provide the victim with a good reputation that is not deserved. It is important to remain unbiased, gather all of the facts, and remain vigilant in the pursuit of the truth.

When there is no dispute that the act of sexual intercourse occurred, but there is a dispute over whether the victim consented or not, collect and review all evidence for possible examination. Generally, for adult sexual assault investigations where consent is the only issue, sexual assault evidence will not be submitted for DNA examination.

In these cases, sexual assault evidence will be submitted for DNA examination if—