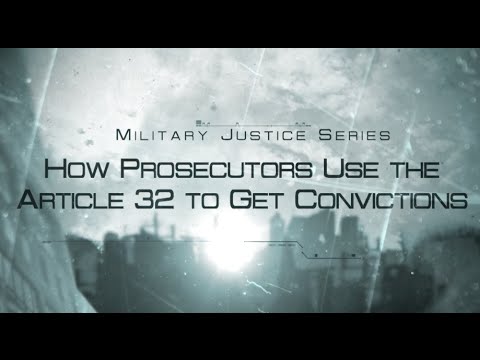 Every time someone is falsely accused of military sexual assault and proves they are innocent, it can be a nerve-wracking experience. They will have to live with the fear of being falsely accused again, which may lead them to withdraw from society or avoid certain areas in order to protect themselves. The defendant’s lawyer in this article argues that there needs to be more protection for the accused, so they can have a chance of preserving their reputation and not live with fear.

Below is a transcript from the YouTube video: How Prosecutors Use the Article 32 Investigations to Get Court-Martial Convictions

Many military sexual assault cases are going forward to court-martial even after an article 32 investigating officer says there’s no evidence here. The victim has credibility issues, the victim a liar, there’s no way you’re going to win. What’s happening now is the prosecution is taking those article 32 investigator’s reports. Because now, through experienced military attorneys are writing these reports, they’re looking at the weaknesses that the investigating officer highlights.

Prosecutor’s will sit down in a strategy session and figure out how to fix the shortcomings. They’re not sitting down in most cases and saying, hey, how do we get this case dropped? The article 32 officer said it’s weak. We shouldn’t go forward. Instead, they’re saying, hey, they’re saying that this witness has credibility issues. What do we do to bolster? We need to find somebody to say that she’s more truthful.

We need to find people to say that the alleged suspect had done something similar in the past that he has a poor character that he’s a dirtbag instead of looking at the report and following the recommendations. So they’re using it pretty skillfully in building a much more solid case against the accused. In a recent case, what had happened was that the article 32 officer said don’t go forward. The alleged victim has credibility issues. So, the prosecution changed some of the charges. Then they added several charges that they knew they could use to get a conviction.

The initial response to a reported sexual offense is critical. When called to investigate a sex offense, the investigator should:

Investigators must be aware that in a sexual assault investigation, the victim and the suspect possess a great deal of evidence on their bodies and clothing. Many times the victim will feel the need to “cleanse himself” of the event, destroying physical evidence. Urge the victim to refrain from discarding, destroying, or attempting to wash away any physical evidence.

Note. In some cases, the suspect is still at the scene. Ensure that the victim and the suspect are separated and not transported in the same vehicle or interviewed in the same office. Not only does it re-traumatize the victim, but it also risks cross-contamination of trace evidence.

One investigator, at a minimum, should be assigned the responsibility of conducting a crime scene examination of the actual scene. A different investigator should be responsible for escorting the victim and obtaining physical evidence at the hospital. The suspect (once identified and apprehended) should be processed by a third investigator; the suspect’s body will hold physical evidence just as the victim’s body does. This will prevent cross-contamination of the three areas where evidence will be located and collected. Medical personnel will conduct collection from the victim and the suspect unless the suspect or the victim has changed clothes since the offense occurred, in which case clothes will be collected where they are located.

Medical personnel must examine all victims and suspects as soon as possible to avoid the loss or degradation of physical evidence. Medical personnel qualified to conduct an examination and collect evidence can include an attending physician, a nurse practitioner, a sexual assault nurse examiner, or a physician’s assistant. Detailed questioning of the victim can be done later, but enough information should be obtained initially to locate the suspect, if possible. Avoid multiple investigators questioning the victim. One investigator should be tasked to interview and obtain any additional information from the victim. This will prevent redundancy and re-traumatizing the victim. Obtain as much information from the initial responder as possible to avoid the same issue.

General evidence collection and crime scene processing techniques are discussed in detail in chapters 2 and 4, respectively. Requirements for collection and preservation of evidence in sexual assault cases are addressed in DODI 6495.02, AR 600-20, and relevant USACIDC policy. There are several evidence considerations that require specific attention or consideration during the investigation of sex crimes. These are discussed in the following paragraphs.

Frequently, there is evidence present on the victim that is not visible to the naked eye. The victim should be examined using an alternate light source. Bite marks, bruises, seminal fluid, and fiber evidence which may not be evident, become obvious when viewed under a light source. To conduct the examination, first, ask the victim where to look for evidence; some victims may require a search beyond where they have indicated. To conduct the examination, activate the light source, put on the appropriate goggles, and slowly examine the area. Different substances will fluoresce at different light wavelengths and may be readily visible with the goggles. Any potential evidence discovered should be photographed and documented.

Foreign hairs and fibers on the body must be collected as evidence from both victims and suspects. The method most often used on homicide victims is combing with a new, fine-tooth pocket comb. It is the best way to find loose hairs and fibers. Pack the teeth of the comb with absorbent cotton along the comb’s base, where the teeth meet the spine. Use separate combs for the head and pubic areas. Use transparent tape to collect fibers from other areas. Do not pull or comb pubic hair from a victim.

Pack each hair sample in a white, sealable envelope or paper bag. Carefully label each sample and identified it with the initials of the doctor or investigator who took the samples. Send the samples to the appropriate crime laboratory for examination.

Collect and test saliva, urine, and blood samples for venereal diseases and the presence of alcohol, narcotics, and poisons. Toxicology examinations pertaining to “date rape” drugs or other controlled substances are conducted by the Division of Forensic Toxicology laboratory within the AFMES. When a toxicology examination is needed in conjunction with a sexual assault investigation, urine is the preferred bodily fluid; however, blood can be obtained and tested. If a date rape drug is suspected, toxicology testing must be performed promptly as these drugs dissipate quickly.

Medical personnel should take fingernail scrapings from each finger. Right-hand scrapings, along with the tool used to scrape underneath the fingernails, must be kept separate from left-hand scrapings and the scraper. The scrapings, properly packed and marked, should be sent to the crime laboratory. This is especially critical if the victim or the subject has been scratched. Hands and fingers should then be swabbed using a sterile swab in cases involving digital penetration.

The clothing the victim worn during the crime is needed as evidence. The investigator must legally and promptly obtain the victim’s clothing. The victim’s family may destroy valuable evidence in an effort to clean or dispose of the garments. Even if a garment has been cleaned, it still may contain valuable evidence and should be secured.

Mark each item for identification. Package clothing in separate paper containers for shipment to the laboratory. If a garment is wet or has damp blood or seminal stains, dry it at room temperature without a fan or artificial heat. The garment must not become contaminated while it is being dried or stored; do not allow it to come in contact with any other clothing.

Package and seal clothing as soon as possible in order to preserve any evidence present. Deliver these items to the evidence custodian in a sealed package pending shipment to the laboratory for examination. If the offense is committed in a bed, mark all bed linens for identification. Packaging and storage requirements for bed linens are the same as clothing.

Take photographs to preserve injuries as they appear on the victim. The photographs can show bruises and cuts that may heal or disappear by the time a suspect is brought to trial. Both bruises and cuts will change over a period of time and should be taken initially and again over the next several days, normally four times with 24 hours of separation (initial, 24 hours, 48 hours, and 72 hours later). Changes in color and shape of injuries may reveal various patterned injuries that may be important in determining the nature of the incident.

If the victim is a minor, consent must be received from the victim’s parents or guardians before taking the photographs (unless the parent or guardian is the offender). The photographs of these areas of any victim should only be made under the supervision of the examining medical personnel. Ensure that a witness of the same sex as the victim is present during the photography process; for example, a female must be present when a female is photographed. LE personnel may photograph the bodies of deceased victims without the permission of the next of kin.

If the victim of alleged sodomy is an animal, it needs to be examined by a veterinarian for bruises, cuts, scrapes, human semen, blood, hair, and clothing fibers. Hair and blood samples should be taken, and swab samples should be taken from body openings. If the animal is to be destroyed, take a picture of it first (showing evidence of the assault). If the animal is dead, the veterinarian should do a complete necropsy. The veterinarian can give expert testimony in court concerning the results of the examination.