Sergeant from Georgia, accused of murdering an Iraqi civilian, sometimes hears taunts, but not from his platoon mates. 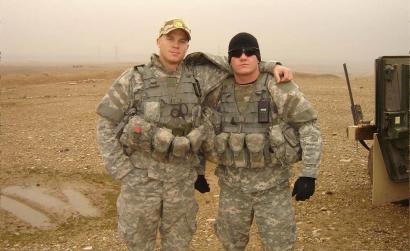 Sergeant from Georgia, accused of murdering an Iraqi civilian

Iraq, Shore (right) poses with Staff Sgt. Jason Paton, who was one of the 10 ‘best friends’ of Shore’s who were killed on Aug. 22 in a Black Hawk crash. Paton was to be married next month.

Honolulu —- The chartered jet skimmed the deep blue Pacific and touched down at Hickam Air Force Base carrying a planeload of soldiers home from 15 weary months at war. It should have been a euphoric moment for Phil Shore —- the moment that all soldiers dream of the entire time they are away.

It had been a tough deployment, one that scarred in so many ways. The young warrior from Winder thought about this as the jet sat on the tarmac for an unusually long time.

Around him, soldiers were fidgeting.

The next thing he heard on the intercom was his own name.

The 25-year-old Georgia soldier collected his backpack and walked down what seemed like a never-ending aisle to the front of the plane.

“Con Air,” said another, referring to the action film featuring a prison plane.

Shore felt his face flush red. He was humiliated. Angry.

The Army accuses Shore of murdering an Iraqi detainee, but Shore maintains his innocence. It cut deep that American soldiers were so quick to judge one of their own.

The jeers stung Shore all the way to Schofield Barracks, home of the 25th Infantry Division. There, the Army tried to place him under a “no-contact order,” which meant Shore would have to stay at least 500 feet away from his platoon mates, who returned to Hawaii in early October, a few days ahead of Shore.

Shore immediately called his lawyer, Michael Waddington of Augusta. He told him he needed his platoon mates around him. They were his ballast.

“I would’ve been completely alone,” Shore says. “Being charged with premeditated murder, that’s a hard thing to grab hold of.”

The platoon had gone through so much, scathed by every facet of the war: injury, stress, wrongdoing and death.

They were determined to get through it all together.

At Shore’s Article 32 hearing last week, his fellow platoon members occupied a row of courtroom seats. They sat still for nine hours listening to testimony that Maj. Gen. Benjamin Mixon, division commander, will consider when deciding within weeks whether to press ahead with a court-martial.

At the end of the day, Sgt. Sergio Pena gave Shore a hug: “We’re with you, man.”

In the early morning hours of June 23, an Iraqi detainee in U.S. custody was shot five times in a rural house near the northern city of Kirkuk. The Army accused Spc. Christopher P. Shore and his platoon leader, Sgt. 1st Class Trey A. Corrales, of killing the unarmed man.

In court, Shore’s lawyer Waddington painted Corrales as a sadistic sergeant who was out for blood. Waddington argued Corrales shot the detainee and then ordered Shore to finish the man after he was already down on the ground, bleeding profusely. Shore said he pointed his M-4 rifle toward the ground and popped off a couple of rounds, intentionally missing the wounded man. The next day, he and three other soldiers from his platoon reported the incident to their supervisors.

The Army, however, doubted Shore’s story and after a month of investigations, charged him with premeditated murder. It’s likely that prosecutors won’t seek the maximum penalty of death, but Shore could still face life in prison.

A shocked Shore finished his days in Iraq confined to Forward Operating Base Warrior, where his company was stationed. He was barred from carrying a weapon, but unlike Corrales, he was allowed to stay in his own bunk, among his friends. It’s what saved him in the waning days of the deployment, especially after the tragedy that consumed the platoon in August.

Since the homecoming earlier this month, the routine involves drunken revelry at night, nursing hangovers in the mornings and segue into afternoons watching football.

Sometimes they talk about Shore’s predicament. Or about Corrales’ character. And their adventures in combat.

They make the Mr. Spock split-finger Vulcan hand sign and laugh at an inside joke they don’t care to explain to outsiders.

On this Saturday, Spc. Freddy Ray Meyers plants himself on the couch, a protective helmet hugging his head. A sniper’s bullet hit Meyers in May. He made a miraculous recovery at the National Naval Medical Center in Bethesda, Md., but half his skull is missing. He is waiting for surgeons to reconstruct what he lost.

Meyers, affectionately called “Fredo,” is the first to laugh about his life-threatening injury. It’s how he —- and everyone else —- copes.

“If you touch me here, you’re touching my brain,” he says, exposing Jello-soft skin and a horseshoe scar arching his head.

He breaks open the box and gets out his computer’s external hard drive. He’s anxious to show everyone photographs.

There are photos of Meyers, when his head was intact; when he was a burly infantryman without fear.

Shore clicks through hundreds of pictures. So many of the faces are gone now. Almost half of Shore’s platoon —-10 soldiers —- died when a Black Hawk helicopter carrying them back to base crashed on Aug. 22.

“I remember they read out all the names,” Shore says, recalling that day’s confusion. “The names didn’t stop.”

From his locker, he takes out the Velcro name tags of each of the fallen. He gathered them before the Army shipped off the belongings of the dead.

“You can process one guy but 10 of your best friends in the whole world?” he says.

Shore had planned to room with Cpl. Nathan Hubbard when they got home. “Baby Hubb” joined the Army with his brother Jason after another brother, Jared, a Marine lance corporal, was killed in Ramadi in 2004. Jason, like the celluloid Private Ryan, was the only Hubbard boy who went home to his parents.

At the memorial service in Iraq, Shore stood before 10 helmets on upended rifles and 10 pairs of empty boots and fought his way through the two-minute speech he had written about Baby Hubb.

“How do you sum up someone in a few minutes?” Shore says. “I cried through the whole thing.”

Staff Sgt. Jason Paton was to be married in mid-November. Shore bought his ticket to California online the day before the crash. After Paton died, his family promised to forward donations made in his name to help pay for Shore’s legal costs.

“That’s all Jeremy talked about —- his son,” Shore says. “He wanted to see him walk.”

Shore was one of the few parents in the young platoon. Before he comes home to Winder in November, he plans to visit daughters Cassidy and Kristen, who live with their mother in Florida. He and Bouffard spoke often about being dads.

Bouffard’s widow and mother flew from western Massachusetts to Hawaii to welcome the platoon back. At first Shore is unsure of Amanda’s reaction to talk about her husband. But then he musters the courage to ask: “Have you seen the pictures, Mandy?”

The few seconds of silence seem eternal. There really isn’t a clear answer at the other end.

Many of the conversations are punctuated by awkward pauses. No one is sure, really, what to say.

It’s best to laugh. They imitate “Bouff” quoting movie lines. They recall how he had left an eight-months pregnant Amanda outside to wash the car while he partied with the boys in the kitchen and forgot the task at hand.

Bouffard’s mother, Paula, helps cook a breakfast of eggs, potatoes and pancakes. “I wanted to meet the guys, they meant so much to my son,” she says.

Back home, Paula Bouffard has a photo of Shore on her refrigerator. She can’t understand how the Army can accuse him of murder.

“It’s a whole bunch of craziness,” she says. “It could’ve been my son in that same spot. I know what my son was like. I know how I raised him. I know the integrity of the people he hung out with.”

The people Bouffard’s son hung out with are the same ones who keep the “what-ifs” from driving Shore insane.

What if he had not been inside that Iraqi house on that summer night? What if the detainee hadn’t died two days later from his wounds?

What if the deployment had not been extended from 12 to 15 months?

“They’d be alive right now,” he says about the soldiers killed in the Black Hawk crash.

Then, he abruptly cuts off his thoughts. He has to.

Shore and the rest of the scout platoon live for the moment. The past is marred and is a reminder that the future could bring more of the same.

UPDATE: THE STORY SO FAR

On June 23, a scout platoon in the 25th Infantry Division was called out to assist in a raid near the northern Iraqi city of Kirkuk. An unarmed Iraqi detainee was shot multiple times. He died several days later.

Spc. Christopher P. Shore of Winder says his platoon leader, Sgt. 1st Class Trey A. Corrales, a native of San Antonio, ordered him to “finish” the man after he was already injured and on the ground. Shore says he intentionally missed the man and reported the incident to his supervisors the next day.

On July 18, the Army charged Corrales and Shore with premeditated murder. The Georgia soldier maintains his innocence.

In early October, the 25th ID soldiers came home to Schofield Barracks, Hawaii, after a 15-month tour in Iraq.

On Oct. 18, the Army held an Article 32 hearing, the equivalent of a grand jury investigation, for Shore. At that hearing, Shore’s lawyers painted Corrales as a sadistic sergeant. Corrales waived rights to his hearing.

What’s next: Division commander Maj. Gen. Benjamin Mixon will look over the Article 32 findings and make a decision in coming weeks on whether Shore and Corrales should face court-martial.