In a court-martial in which the Government intends to offer evidence under this rule, the Government shall disclose the evidence to the accused, including statements of witnesses or a summary of the substance of any testimony that is expected to be offered, at least 5 days before the scheduled date of trial, or at such later time as the military judge may allow for good cause.

This rule shall not be construed to limit the admission or consideration of evidence under any other rule.

[definitions of “offenses of sexual assault” and “child molestation”]. 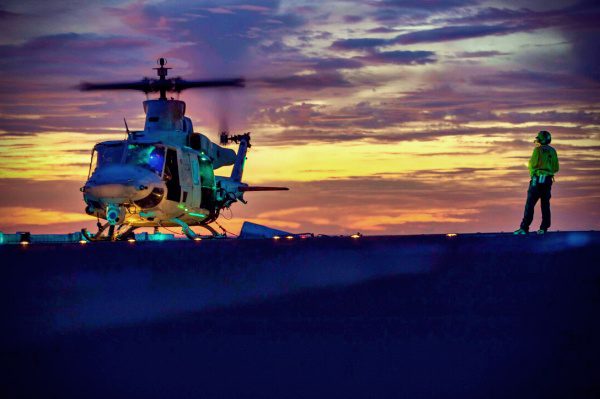 Effect on Other Rules. This rule does not limit the admission or consideration of evidence under any other rule.

Generally. The rules were written to overcome perceived restrictive aspects
of Rules 404(a) and (b). Rules 413 and 414 reject the traditional prohibitions on propensity evidence.

In order to admit evidence under Rules 413 or 414, three threshold determinations must be made:

The factors the judge should consider include, but are not limited to:

United States v. Solomon, 72 M.J. 176 (C.A.A.F. 2013). An incident for which the accused has been previously acquitted can be admitted under M.R.E. 413, but the military judge’s M.R.E. 403 balancing test must fully consider the exculpatory evidence and the fact that the accused has been acquitted. In a case involving the alleged abusive sexual contact of a Marine while he was sleeping, the government offered evidence of a sexual assault against different Marine while she was sleeping, of which the accused had been acquitted at a previous court-martial. At the previous court-martial, the two government eyewitnesses testified that the assault occurred between 0230 hours and 0300 hours. However, the defense presented strong alibi evidence; the accused had been taken into military police custody for DUI at 0158 hours and was not released until 0326 hours. Under those circumstances, “the military judge’s failure to address or reconcile Appellant’s alibi evidence or give due weight to Appellant’s acquittal undermined his M.R.E. 403 balancing analysis such that the decision to admit the evidence was an abuse of discretion.” Id. at 182.

United States v. Bridges, 74 M.J. 779 (A. Ct. Crim. App. 2015). Although a prior acquittal does not bar admission of M.R.E. 413 evidence, the military judge should carefully instruct the panel about the acquittal and “the necessity to conscientiously limit consideration of that evidence accordingly.” Id. at 781.

Use of evidence of another charged offense. 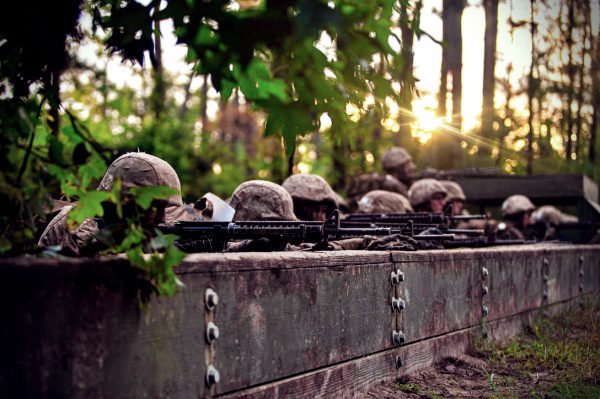 For a discussion of Hills’ holding that prohibits the use of evidence of a charged offense as MRE 413 evidence to prove another charged offense, see DCAP Sends 10-11, CAAF Does Not Allow Charged Offenses as MRE 413 Evidence (June 29, 2016).

After ACCA distinguished several cases to try to limit the effect of Hills, CAAF clarified the broad scope of Hills. CAAF made clear that evidence of a charged and contested offense cannot be used as M.R.E. 413 propensity evidence for other charged conduct in the same case, regardless of whether it is a members or judge-alone trial, the number of alleged victims, or whether the events are connected. United States v. Hukill, 76 M.J. 219 (C.A.A.F. 2017).

Be wary of the tactic to use evidence of a charged sexual assault offense as proof of other charged sexual assault offenses under M.R.E. 404(b) after Hills and Hukill. See United States v. Hyppolite, 79 M.J. 161 (C.A.A.F. 2019). In Hyppolite, the government used the charged offenses to prove a common plan or scheme. See Judge Ohlson’s dissent to see how to unmask the common plan or scheme gambit.

Lack of disclosure. The prosecution must disclose its intent to offer M.R.E. 413 or 414 evidence, regardless of a defense request for disclosure. Compare with Rule 404(b), where notice only has to be given upon request.

The disclosure is required no later than 5 days prior to entry of pleas, unless the military judge allows it later for good cause. M.R.E. 413(b); M.R.E. 414(b).

413(d) Definition. As used in this rule, “sexual offense” means an offense punishable under the Uniform Code of Military Justice, or a crime under federal or state law (as “state” is defined in 18 U.S.C. § 513), involving:

(1) any conduct prohibited by Article 120;
(2) any conduct prohibited by 18 U.S.C. chapter 109A;
(3) contact, without consent, between any part of the accused’s body, or an object held or controlled by the accused, and another person’s genitals or anus;
(4) contact, without consent, between the accused’s genitals or anus and any part of another person’s body;
(5) contact with the aim of deriving sexual pleasure or gratification from inflicting death, bodily injury, or physical pain on another person; or
(6) an attempt or conspiracy to engage in conduct described in subdivisions (d)(1)-(5).

(2) “Child molestation” means an offense punishable under the Uniform Code of Military Justice, or a crime under federal law or under state law (as “state” is defined in 18 U.S.C. § 513), that involves:

death, bodily injury, or physical pain on a child; or
(G) an attempt or conspiracy to engage in conduct described in subdivisions

The other act is not a “sexual offense” or offense of “child molestation.” 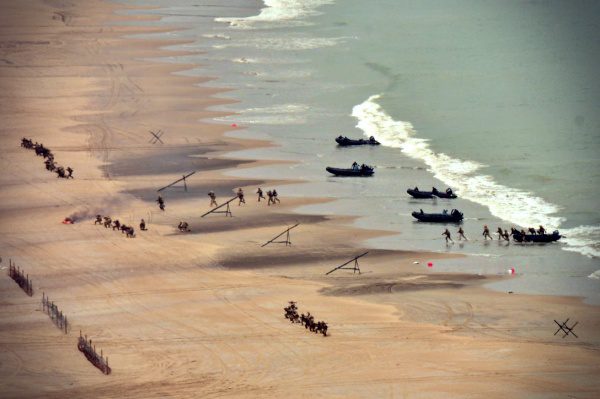 You must carefully work through the above definitions of “sexual offense” and “child molestation.”

United States v. Ediger, 68 M.J. 243 (C.A.A.F. 2010). The accused was charged with sexually assaulting his step-daughter. The government offered testimony by the daughter of a former girlfriend of the accused under Rule 414. Among the many things the former girlfriend’s daughter said the accused did was make a statement after the daughter walked into her mother’s bedroom to find her mother having sex with the accused. The statement, made shortly after the intrusion, was, “if [you] wanted to see what was going on [you] could be a part of it.” The court punted by assuming error and then finding the assumed error harmless.

United States v. Fetrow, 76 M.J. 181 (C.A.A.F. 2017). The accused was charged with several offenses of child molestation against his two stepdaughters. The government intended to offer, under MRE 414, his biological daughter’s testimony that he had sex with a woman in her sight, touched her upper leg in a seductive manner, and exposed his penis to her. The military judge denied the accused’s motion in limine to exclude this evidence, because each of these incidents were “a qualifying offense of child molestation . . . in violation of Article 120 and 120b.” In its opinion, CAAF answered two questions about timing: the uncharged conduct has to have been against the law at the time it occurred; and it must be included in the definition of “child molestation” in the version of MRE 414 at the time of trial. Because the President had not added Article 120b to the definition of child molestation by the time of trial, the touching of the upper leg was within one of the categories in MRE 414 (d)(2) at the time of trial, but the other two incidents were not. Based on the powerful nature of that propensity evidence, CAAF concluded that the military judge’s error in admitting that evidence was not harmless. See DCAP Sends 11-8, Timing Is Everything for Other Offenses of Child Molestation under MRE 414 (April 20, 2017).

The prior act is not relevant, because it does not show a propensity.

Hypothetical case. The accused is charged with sexual assault by having sexual intercourse with a woman who was incapable of consenting at the time of the intercourse. The government wants to offer a prior Article 15 for dereliction of duty for exceeding the scope of practice. During a prior assignment, the accused was an LPN who worked in the OB/GYN clinic. He conducted a digital examination of the cervix of a pregnant woman who came to the hospital because of complications with the pregnancy. Only RNs and doctors are authorized to do digital examinations. Based on training attended by both RNs and LPNs, the accused believed this exam was within the scope of his practice. The trial judge did not allow the Rule 413 evidence, first of all, because the Article 15 was not a proper form of the evidence. Also, a scope of practice violation and the accused’s mistake of fact defense would create a trial-within- a-trial, and, even if proven, the dissimilarity between the events prevented the prior act from having any probative value.

The prior act does not survive the M.R.E. 403 balancing test.

United States v. Berry, 61 M.J. 91 (C.A.A.F. 2005). The accused was charged with forcible sodomy, but pled to consensual sodomy. To prove the greater offense, the government offered evidence that the accused, at age 13, convinced a six-year-old boy to allow the accused to suck the boy’s penis and then convinced the boy to suck the accused’s penis. The boy had initially said “no” to sexual contact. The trial judge allowed the Rule 413 evidence to prove the accused’s propensity to assault sexually vulnerable victims, but the judge did not articulate a balancing of the Wright factors. After conducting its own Rule 403 balancing test, the court found prejudicial error in the admission of the testimony.

The military judge is required to provide appropriate instructions to the panel, when evidence can be used for propensity purposes under M.R.E. 413 or M.R.E. 414. The instruction must inform the court members that: (1) an accused may not be convicted on propensity evidence alone; and (2) M.R.E. 413 or 414 evidence does not relieve the government of the burden to prove every element of every charged offense.

In 2017, after Hills and repeated negative comments by appellate courts, the Trial Judiciary finally changed NOTE 3.2 in Instruction 7-13-1 of the Military Judges’ Benchbook and the M.R.E. 413 and M.R.E. 414 evidence instruction under it.

In determining whether the proffered evidence of an uncharged act qualifies as an “other sexual offense” or “other offense of child molestation,” the military judge applies a two-part test: (1) whether the conduct constituted a punishable offense under the UCMJ, federal law, or state law when the conduct occurred, and (2) whether the conduct is encompassed within one of the specific categories of “sexual offense” or “child molestation” set forth in the version of MRE 413(d) or 414(d)(2) in effect at the time of trial.

When evidence of the accused’s commission of other uncharged sexual offenses under MRE 413, or of other uncharged offenses of child molestation under MRE 414, is properly admitted prior to findings as an exception to the general rule excluding such evidence, the MJ must give the following appropriately tailored instruction based on the evidence admitted. Evidence of other charged sexual offenses or acts of child molestation is not admissible under MRE 413/414 unless the accused has pled guilty to these other charged offenses.

[Instruction:] You have heard evidence that the accused may have committed (another) (other) (sexual) (child molestation) offenses(s). [The military judge may list/identify the evidence admitted pursuant to MRE 413/414, if appropriate]. The accused is not charged with (this) (these) offense(s). You may consider the evidence of (this) (these) other offense(s) for its bearing on any matter to which it is relevant, to include its tendency, if any, to show the accused’s propensity to engage in (sexual) (child molestation) offenses.

The instructions may still be difficult for court members to understand. It would be permissible, if a court member thinks that the other sexual offense or act of child molestation occurred, for that member to infer that the accused had a propensity to commit that type of offense. The court member could then consider that propensity when determining whether the evidence presented on the charged offense proves beyond a reasonable doubt every element of that charged offense. However, if the trial counsel argues for the court members to use M.R.E 413/414 evidence improperly, object.