When You Need a Navy Court Martial Lawyer at Navy Base Coronado, California 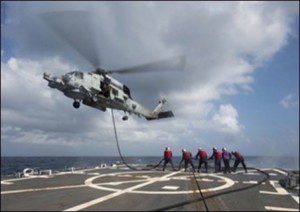 Being involved in a Navy criminal case and dealing with the shady techniques of NCIS can be stressful, especially if you are part of the military and you are unsure as to where to turn. A typical lawyer is not going to have the skills or expertise to be able to give you the advice that you need, even if they are experienced in the area that you’re dealing with. There are different sets of rules that need to be followed and explored when dealing with military cases.

That’s why, if you are in need of criminal defense then you will want to find representation from an attorney that will stand strong to defend your rights and that has experience fighting and winning military cases.

The aggressive defense lawyers at Gonzalez & Waddington have developed a reputation for representing sailors at Navy bases such as NB Coronado. If you are stationed at NB Coronado and are suspected of a military crime, then retaining the most hard-hitting defense attorney can be the difference between having your rights trampled versus winning your case or saving your career. Our court-martial defense lawyers represent NB Coronado sailors in both criminal and administrative matters to include defending Navy sailors suspected of sexual assault, robbery, and other offenses under the UCMJ.

Unlike the majority of civilian-military defense attorneys or a free Navy counsel, pleading guilty is an option of last resort. When our attorneys take a case, we make the Navy prove their case. We take almost every case to trial and fight the allegations in front of a military jury.

Our Navy court-martial outcomes speak for themselves. The accused sailor and his or her well-being is our main concern. Our military defense attorneys maintain lighter caseloads than the average appointed Navy military lawyer so that we can focus on each trial on an individual basis. Your trial will not be outsourced to a third party and we will not push you into taking a dive at the last minute. Our court-martial defense lawyers have defended US Navy court-martial and administrative separation (ADSEP) cases in the U.S. and worldwide.

Our firm’s founding lawyer, Michael Waddington, graduated from Temple Law School in Philadelphia, PA and is a current member of the American Board of Criminal Lawyers. The ABCL is regarded as one of the most prestigious legal groups made up of some of the most experienced criminal attorneys in the USA. Membership is by invitation only and is limited to highly accomplished criminal lawyers that have a decade of experience defending criminal trials, at which time they must have defended 50 or more felony trials, and must have won 35 or more jury trials.

Furthermore, he was voted a “Super Lawyer” in Georgia and is ranked Superb on AVVO.com. Some of his cases were made into documentary films, such as, “Killings at the Canal,” a CNN documentary special that unveils what caused the murders of Iraqi terrorists by Army soldiers. He also regularly teaches criminal lawyers trial techniques. Our hard-hitting Navy military defense lawyers will use our history to fight your court-martial or administrative separation (ADSEP) case at NB Coronado.

Sailors working at NB Coronado merit the best court-martial attorneys available to represent them at their court-martial or administrative separation board.

If you or a family member are stationed at NB Coronado and are suspected of a military crime such as sexual assault or if you are facing an administrative separation, NJP/Captain’s Mast, or a reprimand, then call our military defense attorneys now.

Naval Base Coronado (usually referred to as NB Coronado or just NBC) is one of the most recent Naval Bases to have been completed. NB Coronado is an association of seven different installations that operate under the same Commanding Officer, thus making it easier to manage and reducing the number of administrative needs that each facility would have needed on their own. This helps to reduce costs and make it easier for many who were looking to take care of work in the area to be able to do so.

The seven different installations that were joined together in 1997 are Outlying Field Imperial Beach, Camp Michael Monsoor, Naval Auxiliary Landing Field San Clemente Island, Naval Amphibious Base Coronado, Silver Strand Training Complex, Naval Air Station North Island, and Warner Springs. Due to the merger, there are over 50,000 acres of land that are located in this installation, thus making it one of the largest command areas in the entire United States. While it is only overseen by one Commander, there are a number of lower-ranked officers that do work at all of the different stations that have been brought together, thus making it easier for the entire base to be uniform in purpose and results.

A Brief Look at the Current Role of Navy Base Coronado

Navy Base Coronado is the largest employer in San Diego County, where it is located in California. There are over 35,000 people who are currently working there in both civilian and military positions. NB Coronado is known for its commitment to operational readiness and has people who are ready, both onshore and offshore, to go to wherever it is that they need to go at a moment’s notice.

NB Coronado has landing areas for SEAL groups, aircraft carriers, choppers, and other vehicles that are being used for various parts of the military, both in the water and on the land. One of its facilities, Naval Air Station North Island, is home to almost all of the helicopter squadrons in the Pacific Fleet. The operational training space that has been put together by NB Coronado is unparalleled by any other Naval Base, and thousands of trainees and officers come through on a regular basis.

We Can Help You With Your Case

Are you involved in a criminal case that occurred while being stationed at NB Coronado? Do you need legal advice from a martial law professional that can take care of all of your questions and needs? Don’t try to take care of it on your own or with any random civilian lawyer. Michael Waddington has been working with Navy sailors for years. By contacting the office today, you can make a connection with Waddington and determine to how best to move forward with the case that you’re currently dealing with.