Nontestimonial Statements and the Confrontation Clause

Information on nontestimonial statements and the confrontation clause:

1. Does the Confrontation Clause Apply to Nontestimonial Statements?

(2) The Crawford Court did not decide whether the Confrontation Clause was implicated by nontestimonial statements, stating “[w]here nontestimonial hearsay is at issue, it is wholly consistent with the Framers’ design to afford the States flexibility in their development of hearsay law—as does Roberts, and as would an approach that exempted such statements from Confrontation Clause scrutiny altogether.” Crawford, 541 U.S. at 68. Three (Judge Advocates Association )years later, however, the Court unambiguously held that the admission of nontestimonial statements do not violate an accused’s Sixth Amendment right to confrontation. Whorton v. Bockting, 127 S.Ct. 1173 (2007). [Note: Military courts are not necessarily bound by this Supreme Court precedent. See, H.F. “Sparky” Gierke, The Use of Article III Case Law in Military Jurisprudence, Army Lawyer, Aug. 2005.]

(3) It seems likely that military courts will align their holdings with the Supreme Court regarding nontestimonial statements. As a logical proposition, it does not make sense to apply the Confrontation Clause to nontestimonial statements given the Crawford Court’s explanation that the phrase “witnesses” in the Sixth Amendment only describes those who “bear testimony.” In other words, a person is only a witness if he makes a“testimonial” statement.

(1) Whorton v. Bockting, 127 S. Ct. 1173 (2007). “Under Roberts, an out-of-court nontestimonial statement not subject to prior cross-examination could not be admitted without a judicial determination regarding reliability. Under Crawford, on the other hand, the Confrontation Clause has no application to such statements and therefore permits their admission even if they lack indicia of reliability.”

(2) Davis v. Washington, 547 U.S. 813, 823-824 (2006). “We must decide, therefore, whether the Confrontation Clause applies only to testimonial hearsay; and, if so, whether the recording of a 911 call qualifies. The answer to the first question was suggested in Crawford, even if not explicitly held: “The text of the Confrontation Clause reflects this focus [on testimonial hearsay]. It applies to ‘witnesses’ against the accused—in other words, those who ‘bear testimony.’ ‘Testimony,’ in turn, is typically ‘a solemn declaration or affirmation made for the purpose of establishing or proving some fact.’ An accuser who makes a formal statement to government officers bears testimony in a sense that a person who makes a casual remark to an acquaintance does not.” A limitation so clearly reflected in the text of the constitutional provision must fairly be said to mark out not merely its ‘core,’ but its perimeter.” 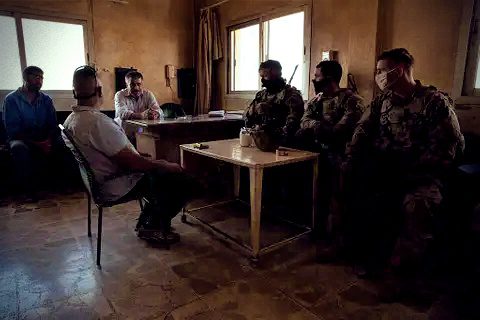 a) Under Roberts, a nontestimonial hearsay statement can be admitted if the proponent can show that it possessed adequate indicia of reliability. Indicia of reliability can be shown in one of two ways. First, if the statement fits within a firmly rooted hearsay exception, it satisfies the Confrontation Clause. If it doesn’t fit within a firmly rooted hearsay exception, it can nevertheless satisfy the Confrontation Clause and be admitted if it possessed particularized guarantees of trustworthiness.

b) Particularized guarantees of trustworthiness could be shown using a nonexclusive list of factors such as mental state or motive of the declarant, consistent repetition, or use of inappropriate terminology. See, e.g., Idaho v. Wright, 497 U.S. 805, 821 (1990) (providing factors for use in analyzing the reliability of hearsay statements made by child witnesses in child sexual abuse cases); United States v. Ureta, 44 M.J. 290, 296 (1996) (giving examples of factors to consider when looking at the circumstances surrounding the making of a hearsay statement when the declarant is unavailable).

c) When analyzing particularized guarantees of trustworthiness, the proponent is limited to considering only the circumstances surrounding the making of the statement, i.e. extrinsic evidence was not permitted. Idaho v. Wright, 497 U.S. 805, 819-24 (1990). This can be confusing, since this limit on extrinsic evidence only applied to the Confrontation Clause analysis. Once a statement meets the Confrontation Clause hurdle, extrinsic evidence is perfectly acceptable for analysis under the hearsay rules. Another source of confusion in military caselaw is the fact that the CAAF has stretched the meaning of circumstances surrounding the making of the statement to include statements made close in time, yet before the actual making of a particular statement in at least one case. See United States v. Ureta, 44 M.J. 290 (1996).

e) The Confrontation Clause analysis chart at Part VI, below, provides a list of hearsay exceptions that are generally considered to be “firmly rooted”.