When You Need an Army Court Martial Lawyer in Missouri

The experienced court-martial lawyers at Gonzalez & Waddington have earned a reputation for representing service members at Army installations such as Fort Leonard Wood. If you are stationed at Fort Leonard Wood or live in Missouri and are suspected of a military offense, hiring the best criminal defense lawyer can be the difference between winning or losing your career. Our military defense lawyers represent Fort Leonard Wood service members in UCMJ and administrative matters, including representing Sailors accused of sex assault, drug distribution, and other offenses under the UCMJ.

Unlike most civilian criminal defense attorneys or your free Army attorney, pleading guilty is not something we commonly do. When our attorneys take a case, we force the U.S. Army to prove their case. We take nearly every case to trial and fight the allegations in front of a military panel.

Our U.S. Army court-martial outcomes speak for themselves. The accused service member and his or her future is our main concern. Our court-martial defense attorneys keep smaller caseloads than the usual free U.S. Army military defense attorney so that we can focus on each trial separately. Your case will not be outsourced to a third party, and we will not coerce you into pleading guilty at the last minute. Our court martial lawyers have defended Army court-martial and Administrative Separation cases in the United States and worldwide.

During the precautionary mobilization of the United States in the summer of 1940, General George C. Marshall authorized the construction of a military camp capable of accommodating 35,000 men on 40,000 hectares of land in Leon, Iowa, named after General Leonard Wood. The original intention was infantry training after the Second World War. The training center, known as Fort Leonard Wood, was called the Seventh Corps Area Training Center and was renamed Fort Leonard Wood on December 3, 1940, after the eminent General Officer who had served for 40 years the country.

The fort benefited from a commission decision to reorient and close the base in 1984 when much of the U.S. Army Engineer School of Operations was consolidated. Before consolidation, officer training was conducted at Fort Belvoir, Virginia. In 1999, as part of the reorientation and closure of the Fort McClellan base in Alabama, schools of the Chemical Corps and the U.S. Army Military Police were moved to this post.

Two future reorientation and closure processes of the base consolidated and relocated their training schools to Fort Leonard Wood. The base became a training center for students of the Chemical and Police Corps. Apart from being a basic training course for new engineers for the Military Police Department, the Basic Training Course for Officers (Phase B), the NCOs Academy, the War Leadership Training Course, the Advanced Training Course, and the NCOs Course. Fort Leonard Woods Non-Commissioned Officers Academy training facilities are the largest in the Army, Army Engineering School, Army Military Police School, and Army Chemistry, Biology, Radiology, and Nuclear Schools. They house three gender-integrated initial military training teams and serve as one of five receiving stations of the Army.

More than 80,000 military personnel and civilians train each year at the 63,000-hectare facility. Fort Leonard Wood in the U.S. Army‘s Allied military mutilation support center that trains chemical engineers, military police, soldiers, and many Marines, airmen, sailors, coastguards, and international students from allies. In addition, the Maneuvers Support Center of Excellence (MOS) at OSUT offers training for combat engineers and bridge engineers (M.O.s 12B, 12C, and AIT) as well as military policemen (31B, 31K, and 31E). 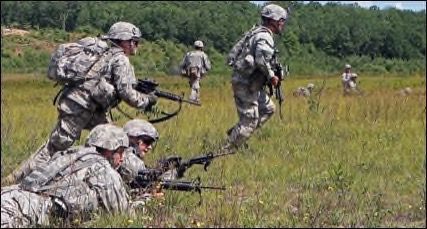 Fort Leonard Wood, a small basic training facility, has become a base known as the Army Centre of Excellence, which annually trains 80,000 to 90,000 military personnel. The fort’s official website points to the increasing number of multi-service operations and now supports Marine Corps and Air Force divisions, which are said to be the largest operations of their kind at an army post. In addition, a post-shuttle service is available for military personnel in uniform, and off-duty hours are offered.

The Waynesville Visa School serves the population of the area and others in Missouri. The Army Community Service is a broader resettlement program that includes newcomers. The School-Age Service offers an after-school program and a full-day program on school-free days.

The Fort Leonard Wood Area includes the unincorporated community of Pulaski County, Big Piney Palace, which serves as a Plato R & V School Base in North Texas County, and the village of Plato, which includes parts of Pulaski County, Laclede, and Wright Counties. In addition, the towns of Waynesville, St. Robert, and Fort Leonard Woods Army and the surrounding rural area of Devils Elbow are served by the Waynesville R & VI School District, the county’s largest school district. The fortress border is north of the town of Waynesville with 4,830 inhabitants and St. Roberts with 4,340 inhabitants.

The remaining 35 percent are in the communities of Waynesville and St. Robert. The United States Army Engineer School is a state-of-the-art training facility that was completed in 1989. Many of his students were born in other states, mostly in Missouri, but also abroad.

The Corps area commander suggested an alternative location in Rolla, Missouri. The accommodation office for the IHG Army Hotel is located in the Soldier Service Center, Bldg. For personnel on PCSE facilities, a rental cabinet is available.

Fort Leonard Wood is located in Pulaski County, where a high percentage of the military personnel live at the post and in the surrounding towns of St. Robert, Waynesville, the towns of Richland, Crocker, and Dixon, and the non-incorporated towns of Laquey, Swedeborg and Devils Elbow, all of which have low housing costs and are close to Fort Leonard Wood and Waynesville. Fort Leonard Woods is located about two hours from St. Louis, Missouri, home to professional athletes such as the St. Louis Cardinals and the St. Louis Blues ice hockey professional team, and is a prime destination for concerts, art, fine dining, and travel thanks to the area’s large airport, Lambert International Airport. Waynesville-St. Robert Regional Airport offers shared flights.