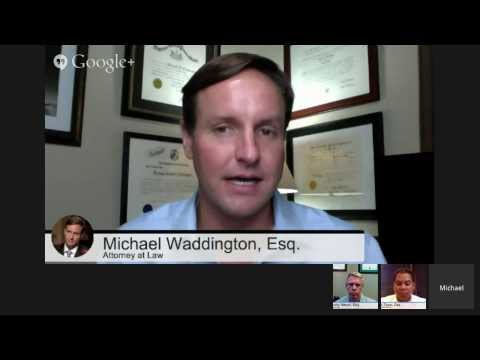 Military Law News Network – Nov 18, 2013 – A civilian jury recently acquitted Air Force officer Lt. Col. Jeffrey Krusinski. Lt. Col. Krusinski was accused of groping a woman outside of a bar in Arlington, VA. In this episode, court-martial lawyers, Michael Waddington, Tim Bilecki, and Noel Tipon discuss the Lt. Col. Krusinski case and how it impacts the military’s ongoing “War On Sexual Assault.” The lawyers also make predictions on how this case may play out in the Air Force. Lt. Col. Krusinski once led the Air Force’s sexual assault response team. A jury of five men and two women deliberated for an hour and 15 minutes in the misdemeanor assault case against Lt. Col. Jeffrey Krusinski, 42, of Arlington, Va.

His arrest fueled a national furor over sexual abuse in the military and whether top brass take the issue seriously.

Link to the the video: http://youtu.be/OIevvlzDgWU

Mike:              An Air Force colonel accused of assaulting a young woman outside of a Crystal City Bar this past spring has been fully acquitted by an Arlington Jury.

Mike:              My name is Michael Waddington with the Military Law News Network.  In this episode, I’m joined by attorneys Timothy Bilecki and Noel Tipon.  The big case this week that concluded on 13 November 2013 is the case of Lt Col Jeffrey Krusinski, but this was not a case that was tried in military courts.

Krusinski, 42 is the head of the Air Forces Sexual Assault Prevention Branch when he was arrested after the March encounter, outside a Crystal City bar.  The incident was swept up in an ongoing debate over whether the military is equipped to handle sexual assaults amongst its ranks.  The interesting thing is in this case, the military was not allowed to have jurisdiction, the State Court decided to proceed because it felt the military was not competent to successfully prosecute and win this case.  So it’s an interesting twist, Noel what are your thoughts?

Noel:              Well with regards the new focus on sex assault crimes in the military, Congress state officials have been focusing on whether or not the military can adequately handle these cases and prosecute these cases.  This is a prime example of where the State took on jurisdiction over a military service member thinking that the military was ill equipped to handle prosecuting this case.

This just goes to show that regardless of what jurisdiction you’re in; bad facts are going to result in an acquittal.  Now in this particular case, this Lieutenant Colonel in the Air Force was arrested in Arlington, Virginia after he allegedly groped a woman in the parking lot.  Now the interesting thing is, this guy is the head of the Air Force’s Sex Assault Prevention Program and apparently, according to the alleged victim she had to fight off her assailant.  The Air Force was going to take jurisdiction over this case and there was a big battle.

For those of you who’ve watched this program before and I’m an avid watcher of it, there has been an ongoing debate between military and the Federal Government and State jurisdictions over who’s going to have jurisdiction over it.  In this particular case the State won out, they said we’re going to take jurisdiction, they took it to trial and last Wednesday, or this past Wednesday the jury spoke.  They found him not guilty and he was acquitted.

Mike:              How do you expect the military’s going to proceed after this not guilty verdict?  Do you think that they may proceed up with their own charges or initiate some other type of action against this Lieutenant Colonel?

The State’s arguably better equipped to try cases, they have more experienced prosecutors, they have more resources to do it.  If there ever was a case, to show Congress that we can convictions on sexual assault, you would think it’s this one.  Especially with this individuals’ rank and what he does for the Air Force.  The interesting thing was, it was also an acquittal and as Mr. Tipon said the reality is bad facts are bad backs.

Out here in Hawaii I can say with some certainty and Noel you can also probably speak to this; that they’re not going to take cases like this.  Facts like this are not going to trial in the State court.  They’re not going to trial because they result in acquittals, because they should never get tried.  So this is a great example that the military needs to really raise the threshold of what they’re trying.  If you try these same cases in the State Court or in the Federal Court, it’s not going to change anything.  We’re still going to have acquittals and so what they need to do is better focus on what cases should go forward.

Now Mike to answer your question; on will the military charges this?  I doubt it, because what’s going to happen is a military jury is probably going to acquit as well.  If a military jury acquits then how ridiculous are they going to look.  Not only could the State not get a conviction, the military couldn’t either and it truly looks like the witch hunt it probably is.

So my gut reaction is, this is the end of the case, it’s over.  The Lieutenant Colonel was acquitted based on minor standing of the facts and I don’t know them all.  The jury got it right, that’s my thoughts on that Mike.

Noel:              If you remember that case, there was a case in Texas that goes to your point Mike.  There was a guy who was charged with killing his wife in Texas.  Now he went through three separate trials in Texas State Court and the Texas State Court was unable to get a conviction.  There was never a full acquittal; it was mistrial after mistrial, because the jury couldn’t come to a unanimous verdict.  Ultimately what happened was, the army decided to take that case to trial, they prosecuted him and they got a conviction.

I don’t know what kind of political ramifications that could have, but that’s certainly a black eye on whoever picked him, whoever selected him to be that guy.  Certainly a black eye on the Air Force saying, look you can’t even stop your own guys from doing this stuff.  So my guess is that even though it’s garbage, in my experience and I’ve seen a lot of bad cases go to trial, just because it is an allegation of sex assault.

Now the bad thing will be if they try and do it and they get a full acquittal, then they really look bad.  In my experience I’ve seen the military take worse cases to trial and that’s the thing.

Tim:                Noel I want to jump in real quick here.  Let’s make a prediction right now in the military.  Mike, Noel are they going to take this to trial, what’s the military going to do with this?  I’m saying right now, on the Military Law News Network that they’re not; they’re not going to touch it.  But if they do and for those of us who watch the program and may wonder if there really is this witch hunt on sexual assault.  If they do take this case to trial, rest assured and the conclusion should be drawn and this should be completely transparent, that the witch hunt is on.

I’m going to say that Air Force isn’t going to subject themselves to this and make a mockery of the system and try to try it again.  That’s my prediction, it sounds like Noel differs from me a little bit and I’m certainly interested in hearing Mike’s opinion on this.

Mike:              Well Tim, I think what’s going to happen is they’re probably going to give the Lieutenant Colonel some sort of a reprimand and some sort of administrative punishment.  Then they’re going to probably initiate a separation on him, I think that’s one way that they’ll save face.  There’s no way they can send him out, you know in the current climate to command air men and to serve as an officer right.

I think they’re going to try to get rid of him; however I do think the Air Force got very lucky here because if they would have fought hard to get that case and would have gotten the case.  They took it to trial and he was acquitted then I guarantee that would have turned some Congress members to want to really revamp the system.  They got a lucky break; the Military Justice System got a lucky break here because the State Court couldn’t do it.  I’m sure they put their best prosecutors on this case, they tried their best to win it and they didn’t it.

This is now an example where the Air Force can say; if they’re smart, the Air Force leadership; hey you guys couldn’t do it any better so get off our backs.  As a matter of fact, we probably could have got an acquittal but you know what, we believe and although it really doesn’t apply.  But fairness is going to make us decide to not Court Marshall him and we’re just going to give administrative separation and try to get rid of him that way.

Noel:              You know what, all those things we’re aspiring and we’re hoping that the Air Force and the military is smart about their military justice.  I’m just too cynical.  I’ve been doing this for long enough and been around enough Court Marshall, enough administrative hearings, my prediction is they’re going to take him to Court Marshall.

Because there is … acquittal that’s fine, but everyone’s saying, well it’s not that he’s innocent; it’s that they couldn’t get a conviction out of it.  If you look at the booking photo of this guy, he got into a fist fight with this girl.  He’s got a black eye, a cut under his eye, there’s no way that this Lieutenant Colonel is of any use military anymore.  I’m just too cynical to believe that they’re just going to let this one go and sweep it under the rug.

I don’t think they’re going to take it to a administrative hearing, I don’t think they’re just going to quietly let him get out of the Air Force.  My prediction is, I know it’s a ball prediction and I hope that they’re smart about it; I hope the military are smart about it and they don’t do it.  Because if they get an acquittal, it’s going to be egg on their face.  My prediction here today is that they’re going to send this guy to Court Marshall.

Tim:                All predictions by Noel Tipon.  Noel Tipon has saying this is going to a Court Marshall, I’m saying it’s over and Mike Waddington thinks it’s going to a reprimand and administrative separation.  It’s going to be real interesting to see how this plays out.  To see what happens …

Mike:              Let me cut you off there, Tim I want to state this for the record.  I’m sorry to cut you off man but if they don’t do an administrative separation then I think they’re going to the route that Noels’ suggesting, but they’re going to charge him with wrongful sexual contact and that’s probably it.  That has the lowest standard of proof, it’s a very low sexual assault charge and it’s pretty easy to prove in a case like this.  So I’m siding more with Noel, I’m kind of going down the middle but I’m siding more with Noel, sorry buddy.

Tim:                Mike I stand alone and I remain with my position.  Viewers, stay tuned to see how this plays out.  We will definitely do a follow up and we’re certainly interested in your take on it.  So if you’ve got an opinion on it, email us, write it or call in.  We’d be interested to see your opinion on it as well.