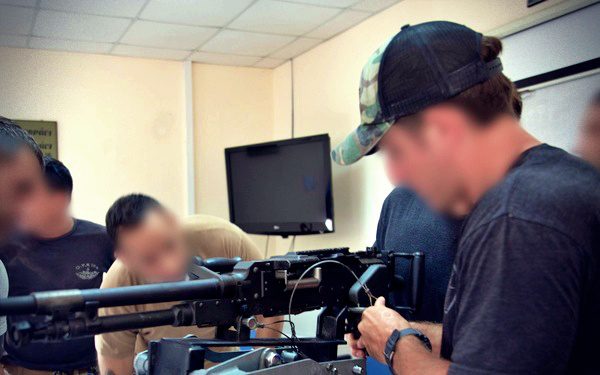 By AUDREY MCAVOY, Associated Press – Oct 19, 2007
WHEELER ARMY AIRFIELD, Hawaii (AP) — A soldier accused of helping his platoon sergeant kill an unarmed Iraqi said he only faked his part of the shooting, intentionally missing the already-wounded man. A military investigation is being held to determine whether Spc. Shore, a Hawaii-based soldier, should be court-martialed for the premeditated murder of a civilian in northern Iraq. (AP Photo/Marco Garcia)

Spc. Christopher P. Shore testified Thursday that he fired shots — but deliberately missed — because he was afraid of openly disobeying the order his volatile and violent platoon sergeant had issued June 23 to “finish” the Iraqi.

Shore, 25, of Winder, Ga., testified at a hearing held to determine whether he should be tried on a premeditated murder charge.

He said Sgt. 1st Class Trey Corrales shot the man several times in the backyard of a house they had searched, then turned to him and told him to kill the man.

“I didn’t know what to do. I just saw him shoot somebody,” Shore said, explaining he was terrified of what Corrales might do to him if he refused to follow through.

After quickly mulling his options, Shore said, he fired two shots “off to the side of his head.”

Army prosecutors allege the two soldiers, members of the Hawaii-based 3rd Brigade Combat Team in the 25th Infantry Division, killed the unidentified man. Their platoon had raided a house near Kirkuk in search of men they believed were planting roadside bombs.

Shore’s court martial hearing took only one day, instead of two as had been expected. A separate hearing for Corrales, who also denies the charge, is scheduled for Monday.

The hearings are similar in function to grand jury hearings in civilian courts. The presiding investigator will make recommendations to the division’s commander, Maj. Gen. Benjamin Mixon, who will decide whether the cases will go to an Army court martial trial in Hawaii.

Capt. Duane Kees, the prosecutor, argued Shore’s two shots hit the Iraqi man in the face, contributing to his death by multiple gunshot wounds. He said Shore shot the Iraqi “to look good for Sergeant Corrales.”

But Shore’s attorney, Michael Waddington, described Corrales, 34, of San Antonio, as moody and said he threatened to harm his men in the past. The defense had planned to call Corrales to testify, but he invoked his right against self-incrimination.

Platoon member Spc. Franklin Eugene Hambrick and other witnesses testified Corrales took the Iraqi man to the backyard of the house after learning he tested positive for having explosive residue on his hands.

Corrales had earlier declared he would kill the next person who tested positive, Hambrick and others testified.

Hambrick said Corrales told the man to run, after which the detainee, looking confused, walked backward. Hambrick said he left after seeing Corrales raise his weapon, not wanting to see what happened next, but did hear several shots.

“I was afraid of what was happening,” he said.

The division recently returned to Schofield Barracks Hawaii after spending about 15 months in Iraq. The battalion commander, Lt. Col. Michael Browder, was relieved of his command in connection with the case although he was not a suspect.