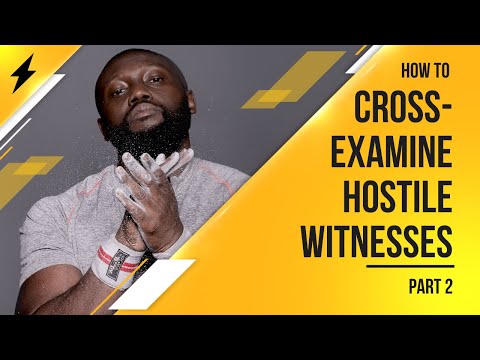 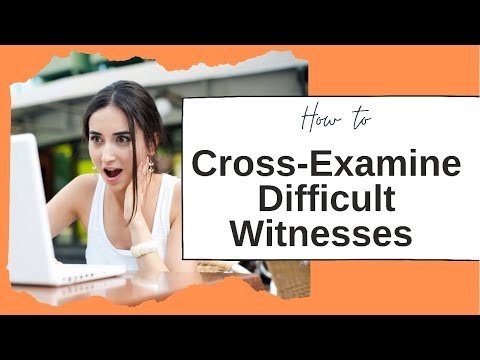 To maintain witness control, you must ask good questions and follow these rules:

He also teaches lawyers across the USA how to effectively cross-examine hostile witnesses and win trials. He has taught thousands of lawyers how to deliver closing arguments, powerful opening statements, and

His bestselling book, The Art of Trial Warfare, I a legal strategy guide that is used by trial lawyers across the USA and taught at various law schools as part of their trial advocacy curriculum.

Mr. Waddington’s book, Kick-Ass Closings: A Guide to Giving the Best Closing of Your Life, is the #1 rated book on closing arguments. It has been an Amazon bestseller since it was published in 2018.

Subscribe below to be notified when we launch part three of cross-examination techniques for controlling difficult or hostile witnesses. Here are the tips. I’m gonna show these slides on this slide again. In the end, you don’t need to write these all down; I’m gonna go through them one by one with examples.

I’m going to talk about a criminal one and then a civil one, the criminal one, it’s a case where, you know, somebody claims that they were attacked by this guy named Johnny, and he tried to kill them. And Johnny’s charged with either a sex crime or a violent crime.

Yes, he did. After Johnny tries to kill you, you return to his house. And here comes the quibbling. Listen, I was under a lot of stress. You know, victims react differently. And sometimes they do things that they don’t. That may seem odd.

Okay, that’s not a responsive answer. All we’re trying to ask is, after Johnny tried to kill you, supposedly, you return to his house. That’s the point. Simply, this witness doesn’t want to say yes. So what do we do? We repeat the question.

After Johnny tries to kill you, you return to his house? The answer, non-responsive. I know what you’re trying to do makes me look bad. But you don’t know what it’s like to you’ve been through something like this.

You can just imagine some of the responses you’re going to get for these types of questions. The point is, they’re non-responsive. Instead of taking the bait and saying something like, Well, I’m not trying to make you look bad. I do know what it’s like because I was attacked once.

Now, if they object and ask an answer, for example, we get that Oh, asked and answered. Do you say? No, Your Honor. My question was this. Did she return to his house after he tried to kill her? That’s all we’re trying to get at?

She has not given responsive answers. Don’t get into an argument over and he and opponents that day, she said this just very calmly say to the judge, Your Honor, the question was, after he tried to kill you, you returned to Johnny’s house.

She has not answered the question, or he has an unanswered question, yes or no, about whether he or she returned the house. It’s as simple as that. And the judge will usually allow you to do that. You don’t want to ask the judge for help. I see that all the time. Oh, Your Honor. He’s not answering the question, please. What that says to the jury is you don’t know what you’re doing.

It’s a simple question. Slow it down. The jury gets the question. Here’s the key here going back to the credibility I talked about in the beginning. If they don’t answer the question, they look evasive. They look snarky. They look quibbling. You’re you slow it down.

You make Don’t try to look exasperated. But just repeat the question to get the answer because over time, the jury’s gonna tune that witness out, and, like, this person doesn’t want to answer a simple question.

They’re not credible. So you win the battle, not only with the answers, but also you win the battle when it comes to them being non-responsive. Now, here’s another quick example. After the rape, you returned to his house, answered, what was I supposed to do?

Man, I don’t know what you’re getting at. And sometimes, you get all these explosive answers. So again, they’re losing credibility. You repeat the question. After the rape, you return to his house. We have a third example. I think you get my point that, but you can take a look at it there. You repeat, repeat, repeat. That’s rule number one.

I’ll give you a real quick civil example. And by the way, as we move through these examples, they’re going to get shorter and shorter, but with the first top the first technique of giving multiple examples, so you get my point, you can apply the techniques.

That’s your question, the answer? Why I conducted a lot of tests on a lot of things. Counsel, that’s often an answer you’ll get from an expert. Let them look like a jerk, please. I love to let experts hang themselves in front of the jury and look foolish, angry, and aggressive. They just look like jerks, honestly. Repeat the question.

Your test tested for Mercury, and you silence no if it’s your client and test fine. You want to teach them to not talk when their silent, but people can’t can can’t help it they have to talk when there’s a son’s when there’s a silence that sometimes the answer the question blurt things out, they feel uncomfortable by the silence and makes them feel awkward.

Well, I mean, I did because I needed my phone. Okay. So the answer to my question was, yes, you returned to his house. That’s one way to deal with that. So you flip the question of if you ask him a question. You said x, you said x, and they say, blah, blah blah non-responsive, then you can flip and put a negative spin on it.

Okay, so you return to his house alone. And so you can have fun with this once you experiment with it and practice it. But stick to the repeat, repeat, reverse. Same thing. Again, it works in civil cases. Again, in all types of cases, I love to use this since a hostile witness in a civil case, for example, asks the question as a question, and they’re fighting you and reverse it.

Well, I mean, I did conduct tests on the water. And what it does is two things, it gets the answer you want, number one, number two, it shows the jury that this witness is playing games, they don’t want to answer the questions, and you’re forced to pull teeth into slowly extract the truth from the witness. Here’s another civil example. Again, you get your test tested for Mercury, non-responsive your test tested for Mercury, non-responsive. reverse it. Your test did not test for Mercury?

Well, I mean, it did test for Mercury. And then there are other comments, you could say, well, that was what I’d asked you twice if it tested for Mercury. Why now?

Are you saying that to test for Mercury? Did you not understand my question the first time? Now don’t be saying things like that and being snarky and less. The jury is there with you.

So your answer to my question is to insert the question yes or no. And this is where it starts getting fun. When the witness is non-responsive, you can usually nail them and make them look kind of silly. And it’s a quick way if the witness is not getting potty trained, you start escalating. Now, all these techniques I’m teaching escalate from one to nine.

They’re escalating here. So the first one is real simple. Repeat the question. As we get up to number nine, it starts to become a little more aggressive. You don’t go to number nine, Number eight, number seven, unless, again, you’re there and the jury is there with you saying like this?

Why would these witnesses answer the question, man, what’s going on here. But you don’t want to go to number nine code read. That’s a nuclear option here. You want to work your way up and use these sparingly. cross-examination technique number three.

So your answer to my question is yes or no.

Technique number three: So your answer to my question is yes or no.

While I didn’t want to wake up my roommate. So your answer to my question, you return to his house alone is yes. And then you’ll get a yes answer. I love this one. I use this all the time on law enforcement when they don’t want to answer questions are. They’re just we’re experts when they’re really snarky or just hostile witnesses in general. You have the same thing with the expert.

Now, this is one way to yoke the expert in front of the jury. Make it clear. Hold on a second now. I’m not playing games. You’re in the big leagues. Don’t underestimate me based on my age, sex, gender, race, like a lot of experts will look out at you like the lawyer and think, oh, this they’re gonna assume things about you because they think often they’re smarter than you.

You come in, and potty train him as a lawyer. From the start, and be like, Hey, man, we’re not playing games here, Dr. Jones or whatever the doctor’s name is that’s out there trying to make you look stupid. You maintain control. You gain control.

Here again, are the techniques for controlling hostile witnesses. If you write me a quick email and just let me know you watch the video, I’ll send you a free copy of The Art of trial warfare. If you have any questions or want to check out any of our other courses, please subscribe below.

We’re going to be putting out content, both long CLE lectures and snippets of the lectures for all different levels of trial practice, from people in high school doing mock trials up to season’s practice, seasoned practitioners. I thank you for being with me in watching this video on sticking with us.