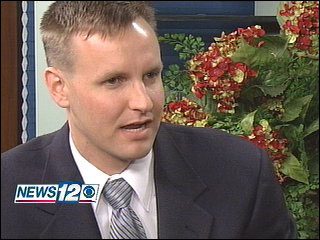 Another detainee abuse case, at Bagram Air Base in Afghanistan, has a local tie.

It was a trial against a U.S. Army sergeant that gained international attention, and the man called to defend him, Army defense lawyer Capt. Michael Waddington, is stationed at Fort Gordon.

News 12’s Domonique Benn has the story of a Fort Gordon lawyer who fought to clear one sergeant’s name.

It was a day that Army Reservist Sgt. Alan Driver from Cincinnati will never forget.

“He got orders telling him ‘report to Fort Bliss, Texas–you are facing a felony court martial’,” says Capt. Waddington. “He was accused of assaulting, abusing, maltreating prisoners that were held at the Bagram Air Base prison in Afghanistan.””

Much different than the Abu Ghraib abuse scandal, there was no nudity or sex in this case.

Instead Sgt. Driver was accused of kneeing a Taliban commander, who later died in Bagram, and of throwing Omar al-Faruq against the wall.

“He did have to pick this man up and place hands on Al-Faruq,” says Capt. Waddington. “And it was common, they were trained on how to physically handle these people and they would often be attacked by these terrorists.”

Right before the trial, which started in October 2005 and ended in February of this year, al-Faruq escaped from Bagram.

He’s the same man accused of the Bali bombings back in 2001.

Capt. Waddington was able to show that al-Faruq was moved out of the jail before Sgt. Driver was accused of throwing him against the wall.

“There was no evidence that he slammed him against the wall that’s what the allegation was. Once witnesses took the stand that’s not how the testimony came out,” Capt. Waddington says.

The jury took 12 minutes to come back with a not guilty verdict.

“He was shaking, he had tears in his eyes, and his family was in the courtroom and they were crying,” Capt. Waddington says.

Sergeant driver is now back with his family in Ohio.

Army defense attorney Capt. Michael Waddington plans to go into private practice here in Augusta when he resigns from the military next month.