Inventory Searches in the Military

General rule. Inventories conducted for an administrative purpose are constitutional; contraband and evidence of a crime discovered during an inventory may be seized. Mil. R. Evid. 313(c).

Purpose. Illinois v. Lafayette , 462 U.S. 640 (1983). Inventories of incarcerated persons or impounded property are justified for three main reasons: To protect the owner from loss; To protect the government from false claims; and, To protect the police and public from dangerous contents.

Discretion and Automobile Inventories. Florida v. Wells , 495 U.S. 1 (1990). When defendant was arrested for DWI and his car impounded and inventoried, the police improperly searched a locked suitcase in the trunk of car despite fact that there was no written inventory regulation. This search was insufficiently regulated to satisfy the Fourth Amendment. See Anderson, Inventory Searches , 110 Mil. L. Rev. 95 (1985) (examples and analysis of military inventories).

General rule. The Fourth Amendment does not prohibit the brief stop and detention of all motorists passing through a highway roadblock set up to detect drunk driving; neither probable cause nor reasonable suspicion are required as the stop is constitutionally reasonable.
Michigan Dept. of State Police v. Sitz , 496 U.S. 444 (1990).

Crime Prevention Roadblocks. Indianapolis v. Edmond , 531 U.S. 32 (2000). Public checkpoints/roadblocks for the purpose of drug interdiction violate the Fourth Amendment. Stops for the purpose of general crime control are only justified when there is some quantum of individualized suspicion.

Information Gathering Roadblocks. Lidster v. Illinois , 540 U.S. 419 (2004). A roadblock conducted in order to gather information regarding a crime committed one week earlier did not violate the Edmond rule, and was not unconstitutional. 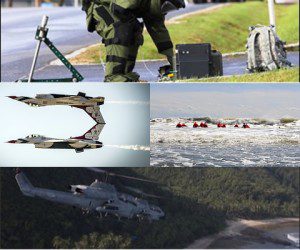 General rule. In emergencies, a search may be conducted to render medical aid or prevent personal injury. Mil. R. Evid. 314(i).
See Brigham City, Utah v. Stuart et al., 547 U.S. 398 (2006). Police may enter a home without a warrant when they have an objectively reasonable basis for believing that an occupant is seriously threatened with such injury.

United States v. Korda, 36 M.J. 578 (A.F.C.M.R. 1992). Warrantless entry into accused’s apartment was justified by emergency when supervisor thought accused had or was about to commit suicide. I. Searches for Medical Purposes.