“I feel wonderful. I’m so relieved that this is all over with. The emotional strain has been enormous,” said Driver.

Driver looks like a different man than the one KFOX interviewed two days ago. 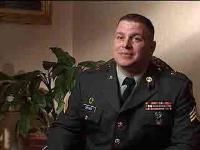 “I knew what I did was just, and that’s been proven today,” said Driver.

Driver, of the 377th Military Police Company, had been accused of kneeing a detainee and slamming a former top al-Qaida operative into a wall. The alleged maltreatment happened while Driver was assigned to Bagram Airbase in Afghanistan.

“I was nervous when the jury went out, but after I saw the facts the prosecution had to present and I knew he wasn’t guilty ’cause I know what kind of person he is,” said his wife, Teresa Driver.

The El Paso Times reported witnesses testified they weren’t sure about statements they gave years ago.

“I felt the witnesses did what they thought was right. They told the truth to the best of their knowledge. These are good men; I have no animosity whatsoever toward these men,” said Sgt. Alan Driver.

“I wanted to jump up and down and scream. I sat in on the other trials and they said no applause, but people did actually applaud in the courtroom,” said Teresa Driver.

“These charges should have never gone forward on any of the soldiers that had been charged. And it speaks for itself,” said Sgt. Driver.

Driver says even though it has been a heavy burden on his family life, he still has faith in the military.

“I’m proud that I served my country as all of us are. I wouldn’t have done anything different,” he said.

Sgt. Driver will serve the remaining two years of his military contract and then go back to school. He’ll go back to his reserve station in Cincinnati, but first he’ll go home to Indiana next week.

Copyright 2011 by KFOXTV.com. All rights reserved. This material may not be published, broadcast, rewritten or redistributed.