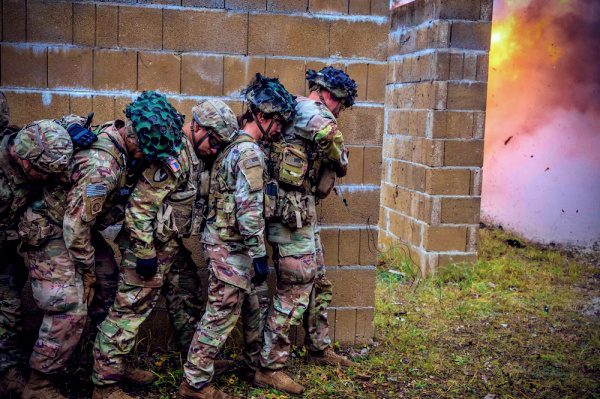 YOKOTA AIR BASE, Japan — A six-member jury panel found a Yokota airman guilty of wrongful appropriation late Thursday but cleared him of a more serious theft charge in a case in which more than $9,000 went missing from the 374th Comptroller Squadron’s vault.

Tech. Sgt. Craig Camacho, 38, who had pleaded not guilty, was expected to be sentenced Friday at his court-martial.

Camacho, an 18-year veteran, was accused of stealing the government funds for personal use between February and September 2007 when he worked as a deputy disbursing officer with the unit.

His civilian defense attorney, Michael Waddington, argued the prosecution overstated its case and said Camacho admitted to taking advances and paying them back.

“They say he took money with the intent of never paying that money back,” Waddington told the court. “Not only did it not happen, but it’s impossible to steal money you’re liable for.”

He also claimed last year’s investigation turned up procedural lapses in protecting the vault area and that an inaccurate count had been performed when Camacho briefly turned over his responsibility to another deputy disbursing officer. And a janitor had been allowed to wander in and out, while keys were found hanging on a thumbtack within 10 feet of one safe, he added.

“It was chaos back there,” Waddington said in closing arguments. “The investigation found that vaults containing $5 million to $6 million each were left open for a week at a time.”

“There were problems. I’m not saying it’s run perfectly, but that’s not a crime,” he said in closing statements.

According to testimony, an internal search revealed no accounting issues or missing paperwork.

Sutanto said Camacho confessed to taking $300 to $800 from the vault as many as a dozen times in the summer of 2007. In earlier instances, he said, Camacho had taken money but paid it back.

“Ultimately, $9,075 is still missing,” Sutanto argued, “and there’s only one possibility why it’s missing: Sgt. Camacho stole that money.”

Lt. Col. Michael Crook, the 374th Comptroller Squadron commander, testified Wednesday that Camacho is paying $1,700 a month in restitution and that the debt will be paid off by mid-January.