Can I own a gun if I received non judicial punishment in the military? 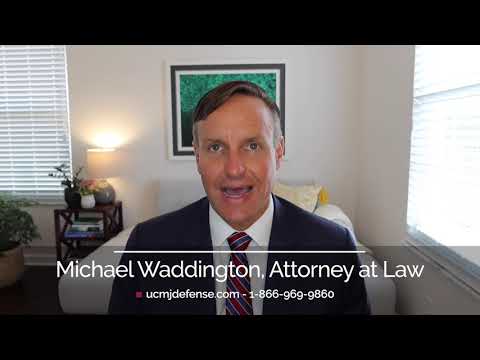 Falsely Accused of a Military Sexual Crime? What to Do If It Happens to You

Below is a transcript from the YouTube video: Can I own a gun if I received non judicial punishment in the military?

Can you own a gun? If you’ve received non-judicial punishment in the military? My name is Michael Waddington, and I’m a criminal defense attorney. Generally speaking, the answer is yes, unless there are some other facts out there that we’re not aware of. And you have some other things in your background, but just getting NJP non-judicial punishment or captain’s mast will not strip you of your rights to own a firearm.

Evidence tells a story and helps crime scene investigators recreate and establish a sequence of events. Investigators on the scene are taught to assume physical evidence is left behind, but the amount and nature of physical evidence depend on the circumstances of the crime. Without the assurance that a forensic scientist will take care of the evidence at the scene, investigators may be forced to edit several exhibits to protect evidence from environmental damage or other security threats.

Crime scene management skills are an essential part of the investigation, as evidence from the crime scene provides a picture of the events that the court will consider in its deliberations. A team of crime scene agents searches the crime scene to gather evidence, consisting of a crime scene photographer and evidence collectors specializing in collecting specific evidence like latent prints, DNA traces, evidence, and the like. Then, based on information from witnesses and interested parties, crime scene teams develop evidence-gathering strategies that consider weather conditions, time of day, and other factors.

Suppose the case theory is that the intruder entered the apartment through a window. In that case, the crime scene technician must examine the window area for shoe patterns, tool marks, and evidence of latent fingerprints. To find such evidence, the technician must photograph it on-site, fill in a sketch with the items’ exact location, and sketch the shoe samples. When creating a contamination path, the first investigator should avoid it where it interferes with existing evidence and only place it where it is needed to get a physical view of the entire crime scene.

When the technician in the CSI crime lab discovers many traces, they shake the bed, clothes, towels, sofa cushions, and other items found at the crime scene. CSI retrieves the victim’s clothing from the crime scene to the lab to test it for GSR if the crime is a weapon. Since it is impossible to hand over the entire object with the imprint to the Crime Lab, the CSI will conduct casting of the crime scene.

CSI notes are a critical part of the physical evidence available at the scene. Furthermore, suppose the investigator decides in good time to obtain written consent for a search warrant. In that case, the evidence presented to the criminal laboratory is admissible and is not subject to any request for suppression. When CSI detects an item of evidence at a crime scene, it photographs it, logs it, restores it, and marks it.

Make an investigation and give investigators the location where the evidence of the crime was found. Go through every square centimeter of the scene to find small particles of evidence. Suspects can pose as witnesses or victims at the scene.

Certain packages of physical evidence can be collected and left behind. For example, CSI will provide the lab with signed contracts, receipts, torn letters, garbage, and other written, typewritten, or photocopied evidence related to the crime. Physical evidence can corroborate the testimony of the victim (s), witnesses, or suspects.

This type of evidence requires special handling, and only experts trained in the handling of digital objects are allowed to edit and collect it. It is normal for others interested in property to want to regain access to the property, but CSI will not rush to persuade or intimidate anyone to release the scene to get the job done. Most law enforcement agencies conduct such investigations into unsupervised deaths without a doctor present, which is a possible homicide if found.

All police officer must be knowledgeable in: