When do I get a Free military JAG defense lawyer? – UCMJ defense 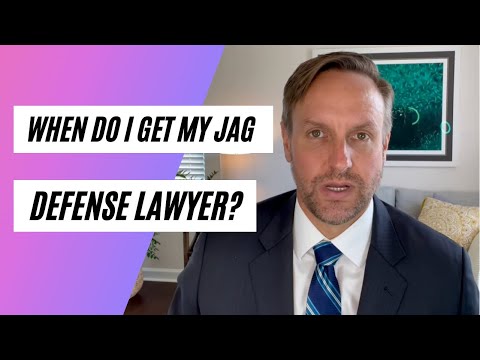 When do I get a Free military JAG defense lawyer?

Criminal Defense Attorney, Michael Waddington, answers the question:
When does the military assign me a JAG military defense lawyer? Not until you are facing a court-martial or administrative separation board.
Call 1-800-921-8607 to speak with a civilian defense attorney today.

When does the military assign me a military criminal defense lawyer?

You’re theoretically allowed to have a military defense lawyer at any time if you are in need of rights advisement, or if you are suspected, under investigation, or being accused of a crime. The problem you may encounter is that since the JAG Corps has been cutting back on defense attorneys over the past 10 or 15 years, there aren’t a lot to go around. Those that are around are often overworked and, especially with COVID it’s been very tough to get a hold of a military lawyer. So what we’re seeing throughout the military branches is that a person could be suspected for a year of having committed a crime, and the military still won’t give them a lawyer.

They might give you someone to talk to over the phone for a few minutes who will tell you to not speak to any military investigators and to not consent to any searches or seizures, but that’s basically it. If you want to have a lawyer on your side from the very beginning of your case, you’re going to have to invest in yourself and hire a civilian lawyer.

Alexandra González-Waddington – Alexandra is a founding partner of the González & Waddington Law Firm and a Georgia registered mediator. She has represented and defended hundreds of defendants charged with sexual assault and has worked on some of the most notorious war crime cases stemming from the Iraq and Afghanistan wars.