Military Rules of Evidence and the Fourth Amendment

A soldier’s reasonable expectation of privacy must be balanced against:

Searches by persons unrelated to the government are not covered by the Fourth Amendment.

No government search occurred where Federal Express employees opened damaged package. United Parcel Service employee opened package addressed to accused as part of random inspection. Held: this was not a government search. Searches by government officials not acting in official capacity are not covered by the Fourth Amendment. Search by military policeman acting in non-law enforcement role is not covered by the Fourth Amendment. Whether a private actor serves as an agent of the gov’t hinges not on the motivation of the individual, but on the degree of the government’s participation/involvement.

Fourth Amendment does not apply to search by U.S. agents of foreigner’s property located in a foreign country.

The Fourth Amendment is inapplicable to searches by foreign officials unless U.S. agents “participated in” the search. Mil. R. Evid. 311(c) and 315(h)(3). 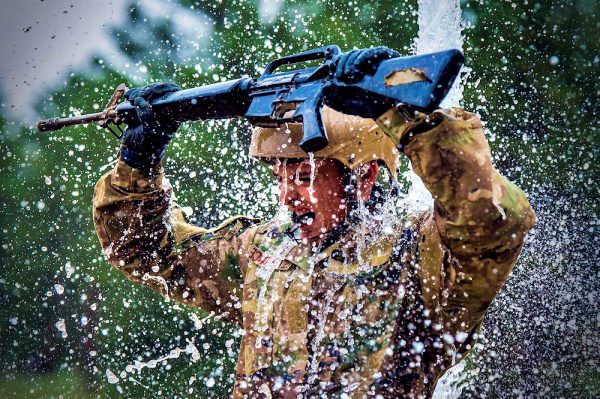 “Participation” by U.S. agents does not include:

Fourth Amendment did not apply to German search of off-post apartment, even though military police provided German police with information that led to search. Military police officer participated in Panamanian search by driving accused to Army hospital, requesting blood alcohol test, signing required forms and assisting in administering test. A search by foreign officials is unlawful if the accused was subjected to “gross and brutal maltreatment.” Mil. R. Evid. 311(c)(3).

Garbage – There was no expectation of privacy in sealed trash bags left for collection at curbside.

Clearing quarters – There was no reasonable expectation of privacy in blood stains found in quarters accused was clearing when accused removed majority of belongings, lived elsewhere, surrendered keys to cleaning team, and took no action to protect remnants left behind.

Voluntarily abandoned property – An accused has no privacy interest in voluntarily abandoning his property prior to a search, and subsequently lacks standing to complain of the search or seizure of such property.

Lost computer – A government interest in safeguarding property outweighs reduced expectation of privacy in laptop computer left in restroom by a student at an entry-level school.

Peering into Automobiles – Peering into an open door or through a window of an automobile is not a search. If the car is stopped by a law enforcement official and then peered into, the investigative stop must be lawful.

The “passerby” – Peeking through a 1/8 inch by 3/8 inch crack in the venetian blinds from a walkway was not a search. Security police’s view through eight to ten inch gap in curtains in back patio door was unlawful search because patio was not open to public.

The Department of Justice has promulgated a manual on computers and criminal investigations.

Accused did not have a reasonable expectation of privacy in e-mail mailbox on government server which was the e-mail host for all “personal” mailboxes and where users were notified that system was subject to monitoring.

There is no reasonable expectation of privacy in subscriber information provided to a commercial internet service provider.

Reasonable expectation of privacy found in e-mail communications regarding drug use on a government computer, over a government network, when investigation was conducted and ordered by law enforcement instead of originating with computer network administrator. (This is a narrow holding as USMC log-on banner described access to “monitor” the computer system –not to engage in law enforcement intrusions by examining the contents of particular e-mails in a manner unrelated to maintenance of the e-mail system).