When Do I Hire a Civilian Defense Lawyer? 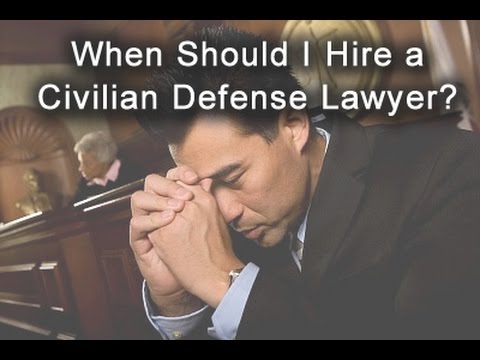 Our hard-core military criminal defense attorneys at Gonzalez & Waddington use their his cunning to build a winning cutting edge defense against military accusations in federal, military, and state courts. I often get this question. I get a phone call from someone and they say I’m under investigation, OSI and CID  just called me in. When should I hire an attorney?

Well, the fact that you’re calling me and you’re facing felony level charges in the military is a good indicator that things aren’t going your way and you need to get someone on your team to back you up and start advocating advising and fighting for you. If you wait around to see what happens. There’s a high likelihood that you will be charged or you will have some sort of adverse action placed against you

William Fitzpatrick, the district attorney of Onondaga County, N.Y., a New York Forensic Science Commission member, said he was welcome to continue research but was wary of losing the ability to use bite marks and blood splashes that remain useful but have been ridden by inexperienced investigators. The Scientific Areas Committee (OSAC) of Forensic Science, which is charged with securing the scientific basis of forensic subcommittees, reviewed the methods of 25 forensic disciplines, including the analysis of bloodstain patterns. Still, Chu said there are few places where judges, lawyers, scientists, and other stakeholders can meet. For example, in 2016 the Texas Forensic Science Commission that reviews cases using bloodstain pattern analysis determined that bloodstain analysts would need accreditation to testify as experts in Texas courts from 2019.

Dr. Paul Kirk of the University of California, Berkeley studied bloodstain patterns at the scene and the scientific research he used to formulate his opinion on bloodstains and patterns on the walls of Sheppard’s bedroom. Trained in the eye of science, their authors, eminent experts, believed that investigators could analyze blood-stained crime scenes to determine crucial evidence, such as where the victim was during the bloodshed and what kind of beatings, beatings, shootings, or stabbings were inflicted on him. MacDonell claimed he reconstructed the scene by reading where the bloodstains had been left.

Forensic technicians try to obtain as much information as possible without disturbing the crime scene when treating blood traces. The pattern of the bloodstain, also known as a blood spatter, is important for identifying the weapon used to inflict the injury and can help determine whether the victim was moving, motionless, or injured.

A criminal trial may involve recording the blood spot using a sketch, video, or digital camera. Another method of documenting traces of blood is drawing or sketching the crime scene. Law enforcement investigators can take photographs with a ruler of evidence of case size and relevance and allow direct comparison to bloody shoe prints, fingerprints, and blood spatter patterns at high speed.

When examining bloodstain patterns at the scene, forensic technicians measure the diameter of the bloodstains to determine whether the bleeding person was standing, holding something on the ground, or lying near the ground. In addition to a pronounced shape, blood drops are viscous and have adhesive quality, which means that small amounts of blood stick to most surfaces and dry out on contact.

In many cases, the pattern a bloodstain leaves behind, including the number, size, location, and overall distribution of drops, can reveal a lot about the shooter, the victim, and the weapons involved. Patterns, stains, and blood can also provide important clues about the nature of an accident or crime.

Based on the different sizes and shapes of the drops of blood, investigators can determine the weapon type that caused the attack, determine the general area in which the attack took place, and track the victim’s position. The analysis of bloodstains can also help to reveal the nature of the injuries and the order in which the wounds were picked up. In addition, detailed analysis of the blood extracted from stains can reveal genetic and other information to help identify the victim and the responsible person.

Analysts examine the size, shape, distribution, and location of the bloodstains at the scene to establish what happened and what didn’t. For example, suppose at the scene there appears to be a random distribution of bloodstains. In that case, analysts can categorize the stains and collect information about spray patterns, transmissions, cavities, and other traces that can help investigators trace the sequence of events during the bloodshed.

While DNA analysis in research laboratories has been refined for basic biology and applied forensics purposes, blood spatters have a subjective heritage based on experience, anecdotes, and empirical observations. Blood spatter analyses can effectively determine the placement of perpetrators, victims, and weapons during a violent crime. Therefore blood spatter analysts are often asked to make their claims.

Blood spatter analysis (also known as blood spot pattern analysis ( BPA ) is an area of forensic science that consists of examining and analyzing bloodstains from known or suspected crime scenes to conclude the nature, timing, and other details of a crime. Analysis of blood splashes is not a new technique for investigating brutal crimes. However, the first modern study of this technique was published in 1895 when Eduard Piotrowski of Krakow University published an essay entitled “The formation, shape, direction, and spread of bloodstains due to blunt trauma of the head.”

The reliability of blood spatter analysis has never been proven or quantified. Still, with its steady court approval and fluctuations in other forensic sciences, BPA has begun to face increased scrutiny. Through the work of innovative forensic scientists such as Herbert Leon MacDonell, who published “The Flight Characteristics of Human Blood Flein Patterns” in 1971, the field has expanded and modernized enormously. Macdonell trained law enforcement officers in blood-spattered analysis and developed courses that continue to train analysts. In 1973, he developed a training program that trained the first of many blood donation institutes.

In the criminal trial of David Camm, who has been tried three times for the murder of his family based on blood splashes, both the prosecution and the defense used experts in bloodstain pattern analysis to interpret the source of the eight drops of blood on his shirt. Prosecutors’ experts, including Tom Bevel and Rod Englert, testified that the blood was a high-speed splash.

Prosecutors said a flashlight found in Bryan’s car on the day of the murder contained a small drop of the victim’s blood, but this was the only suspected test that was carried out. Dr. Paul Kirk showed the position of the attacker and the victim, and his investigation revealed that the attacker struck with his left hand the victim. Witnesses used forensic blood sample analysis (BPA) technology to interpret the spot where the blood was found as the hand holding the torch he laid on his wife after she was shot, and that testimony was at the forefront of Camm’s sentencing.